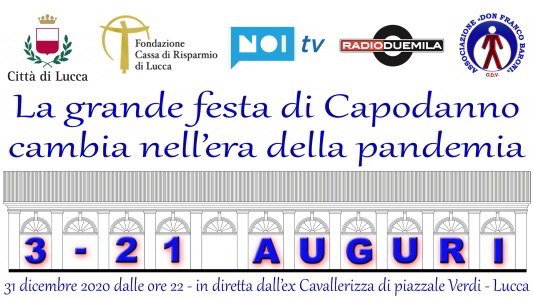 Midnight with live TV on the NoiTV channel, live on NoiTV Live web streaming and live radio on Radio 2000, for the 23rd New Year's Eve Party 3 - 2 1 Auguri. In the space of the Ex Cavallerizza in Piazzale Verdi in Lucca, New Year's Eve with music by DJ Federico Avanzati and singers from Lucca, show with the ABBA Dream band and awarding of the "Lucchese dell'anno" prize with the traditional toast. Emanuela Gennai presents the party night.

After 18 minutes, 1 second and 224 thousandths of a second after midnight, a second toast to the new year will be made. At that time, in fact, midnight in Lucca is celebrated, following the transit of the sun with the historic sundial located on the clocktower in via Fillungo.