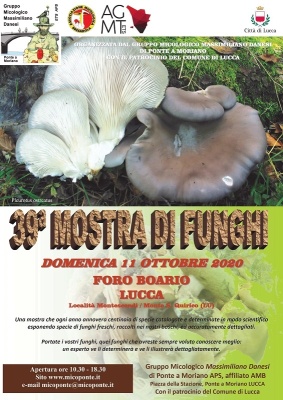 Also this year the mycological association Danese proposes an unusual version of the annual mushroom exhibition including each year hundreds of species cataloged and scientifically determined. Various species of fresh mushrooms, collected in the local woods, are exposed in detail.
In the exhibition visitors can admire numerous species of fresh mushrooms that the members of the mycological group of Ponte a Moriano have collected in these days to be displayed after having been determined and cataloged.

On Sunday 11 October at the Foro Boario in Montescendi / Monte S. Quirico the 39th Mushroom Expo, organized by the mycological group Massimiliano Danesi of Ponte a Moriano with the patronage of the City of Lucca is inaugurated at 10:30 am and will be open until 6:30 pm.

An unmissable event for enthusiasts and a chance to compare hundreds of edible, toxic or poisonous species.
During the exhibition the Danese mycologists are at disposal for details and explanations. Visitors can also bring species collected by themselves which will be analysed and, if not present, will be included in the exhibition.