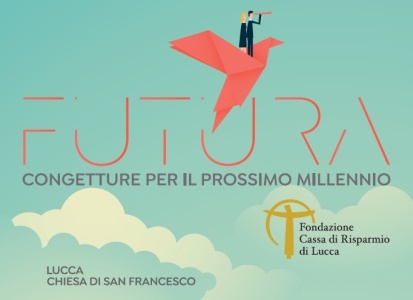 Conversations in San Francesco are back in Lucca from 14 October to 20 November, thanks to the Cassa di Risparmio di Lucca Foundation. A series of events focused on the theme Futura. Congetture per il prossimo millennio (Futura. Conjectures for the next millennium).

The 7th edition of the "conversations" includes the participation of personalities with various cultural backgrounds, who address the issue with different languages ​​and outlooks. Futura, in the Latin meaning of 'future things', is a stimulus to look to tomorrow with tools available today and is a tribute to the famous song by Lucio Dalla, who had imagined the love story between two Berliners, divided between East and West, who thought of a hypothetical child, who would have a life without barriers, and if she were a girl she would be called Futura.

In the program on Friday 20 October

5.00 pm - Auditorium of the San Francesco church | L’America al voto e l’economia del futuro. (America in the vote and the economy of the future). Journalist Alan Friedman talks with Nobel laureate Michael Spence on the political and economic prospects that are emerging on the eve of the election day in the United States. Renata Busettini and Max Ferrero also participate in the meeting, authors of the exciting photographs of the book L’America di Trump, that Alan Friedman wrote the texts for.