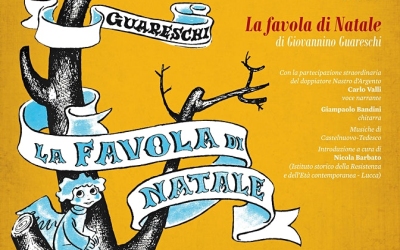 La favola di Natale  (The Christmas Tale) is a concert show taken from the literary work of the writer and journalist Giovannino Guareschi, and staged on January 27 at the Auditorium of the ISSM Boccherini music school in occasion of the International Holocaust Remembrance Day.

A dream of freedom dedicated by Giovannino Guareschi to his children. Written in December 1944 during the period of his imprisonment, it was presented for the first time on the evening of Christmas Eve of the same year in his hut in the prison camp.

"This fairy tale was created in a concentration camp in the German Northwest, in December 1944, and the muses that inspired it were called Cold, Hunger and Nostalgia. I wrote this story curled up in the lower bunk of a two-seater "castle" bed, and above my head was the melody factory. I would send up from Coppola verses of naked and cold songs, and Coppola would send them back to me dressed in music as soft and warm as angora wool ". (Giovannino Guareschi)