THE MIRACLE OF SAN PAOLINO 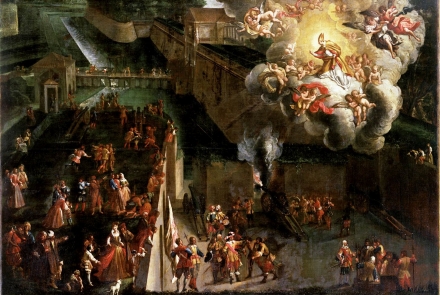 In the year 1664, the day of the patron saint celebrations of Lucca, cannons were fired, but that day, the cannons were not loaded with blanks as expected, but they fired on the crowd! Only the miraculous intervention of the saint saved people gathered around the city walls.

The commemorative painting, realized by Giovanni Domenico Lombardi aka Omino between 1682/1751, perfectly illustrates the scene on the recognizable new Renaissance walls. San Paolino is at the top on the right surrounded by angels.
Below him, in the parade ground, the bomber captain and the captain's aide guard the guns.

On the left side of the cannon there are two drummers and three bombers, a flag bearer and a broken spear.

On the bridge in front of the San Donato gate designed by Muzio Oddi from Urbino between 1628 and 1639 and completed in 1667 with the arrangement on either side of two statues depicting the Saints Paolino and Donato, a crowd of people, as well as on the square of the bastion, seem to confirm the celebrations.

Another painting, attributed to Pompeo Pinotti, placed on the counter-façade wall, represents the Saint as it is customary to represent him in Lucca: he holds the city of Lucca in his hands, in particular the Roman city easily recognizable by the walls with towers.

The same representation can be found on the San Donato gate and in the choir of the cathedral where the miracle of 1664 is also represented.

S. Paolino was the first bishop of Lucca and martyr on Mount Pisano, once known for the presence of many hermits and religious people.

On 15 June 1261 the bishop of Lucca granted indulgence in memory of three martyrs, listed only by name: Paolino, bishop and disciple of St. Peter the apostle and first bishop of Lucca, Severo the presbyter and Teobaldo the soldier.
The martyrs named on that occasion ended up in oblivion, except San Paolino who became the first bishop, evangelizer and patron, despite the ancient cult paid to the local bishop San Frediano and the one already considered the patron of Lucca's Church of San Martino, to whom the cathedral was dedicated.
The cult of St. Paolino increased in the following centuries; between 1518 and 1519 a larger and richer basilica for the patron saint was erected, based on a design by Baccio da Montelupo, where the ancient sarcophagus is kept, with an epigraph describing the discovery of the relics of San Paulino, San Severo and San Teobaldo.

The celebrations of the patron saint start from this basilica and culminate in the Palio di San Paolino on the night of the feast, preceded by songs, music and flag games.