ON THE HERMITs MOUNTAIN

A walk in medieval Tuscany between history, nature and legend. On Mount Pisano, the "Mons Heremita" Mount Pisano has a noble and legendary past.

The subsoil, rich in long limestone caves, has always been a destination appreciated by geologists and speleologists. Limestone emerges in the hills close to the Apuan Alps. It is used in most of the churches of the surrounding area and in the historic center of Lucca.

On the surface the Mediterranean scrub alternates with dense evergreen holm oaks and rich in game, while in the peripheral area aristocratic villas and villages are located; in the low garrigue with the most rugged and silent peaks the hermits once found refuge and, in summer, the vegetation smells of helichrysum and other marine blooms, while the terraces are full of olive trees and the hills of lilies, anemones and wild orchids.

An environment full of charm and natural beauty. The mountain was and is still today a crossroads of paths and roads passing an uncontaminated landscape, opening onto the panorama of the plain of Lucca, the Versilia coast and the plain of Pisa. 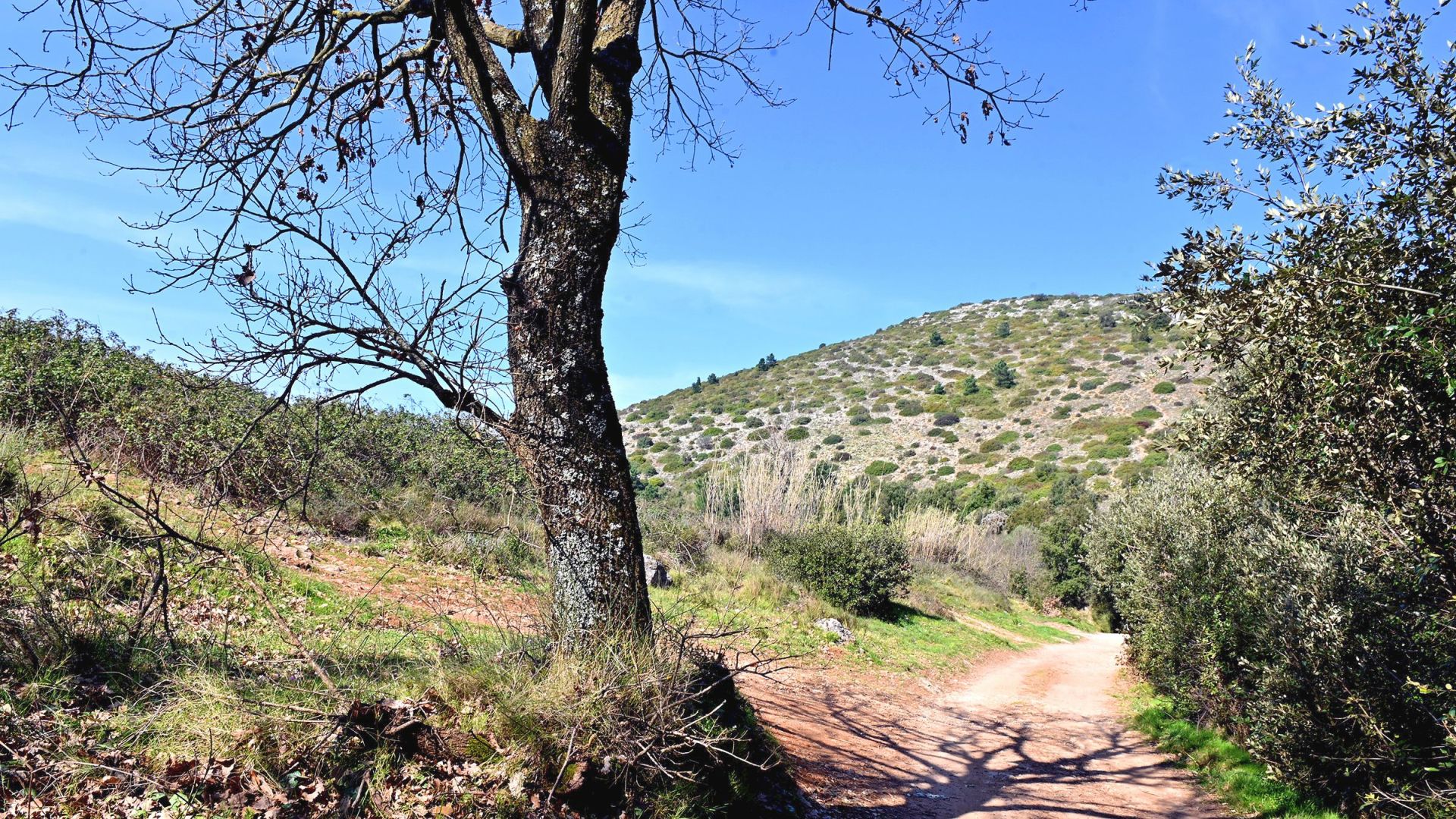 The new road leading from Lucca to Pisa crosses this fantastic journey through small treasures of Romanesque architecture immersed in the silence and scents of the countryside.

Starting from Lucca, and entering the countryside, the first village you meet is San Lorenzo a Vaccoli, crossed by the road once the only one leading to Pisa.

The Oratory of San Salvatore, which has been mentioned since the 8th century, is a small buildingmade of local white limestone mixed with stone with a singular asymmetrical façade and a bell gable.

Going up the slope, in the village of San Michele in Escheto, you reach the Church of San Michele Arcangelo.
The church dates back to the 8th century and was later renovated in several periods between the 11th and the 18th century, maintaining the particular charm of the ancient country churches.

Going further up the mountain, you reach the Convent of San Cerbone, a place of silence and meditation that legend says it was founded in the place where San Cerbone and San Regolo fleeing Africa found shelter. The large Romanesque church with an important wooden choir of fine workmanship, and the large terrace from which you can enjoy a splendid  view on Mount Pisano and the plain of Lucca, are still the fulcrum of the complex managed by the sisters of San Francesco di Sales who offer accommodation in the convent rooms,  the possibility to study in the library, refreshment in the refectory, peace in the cloister, work and meditation in the olive and the vegetable garden, like in the orchard. 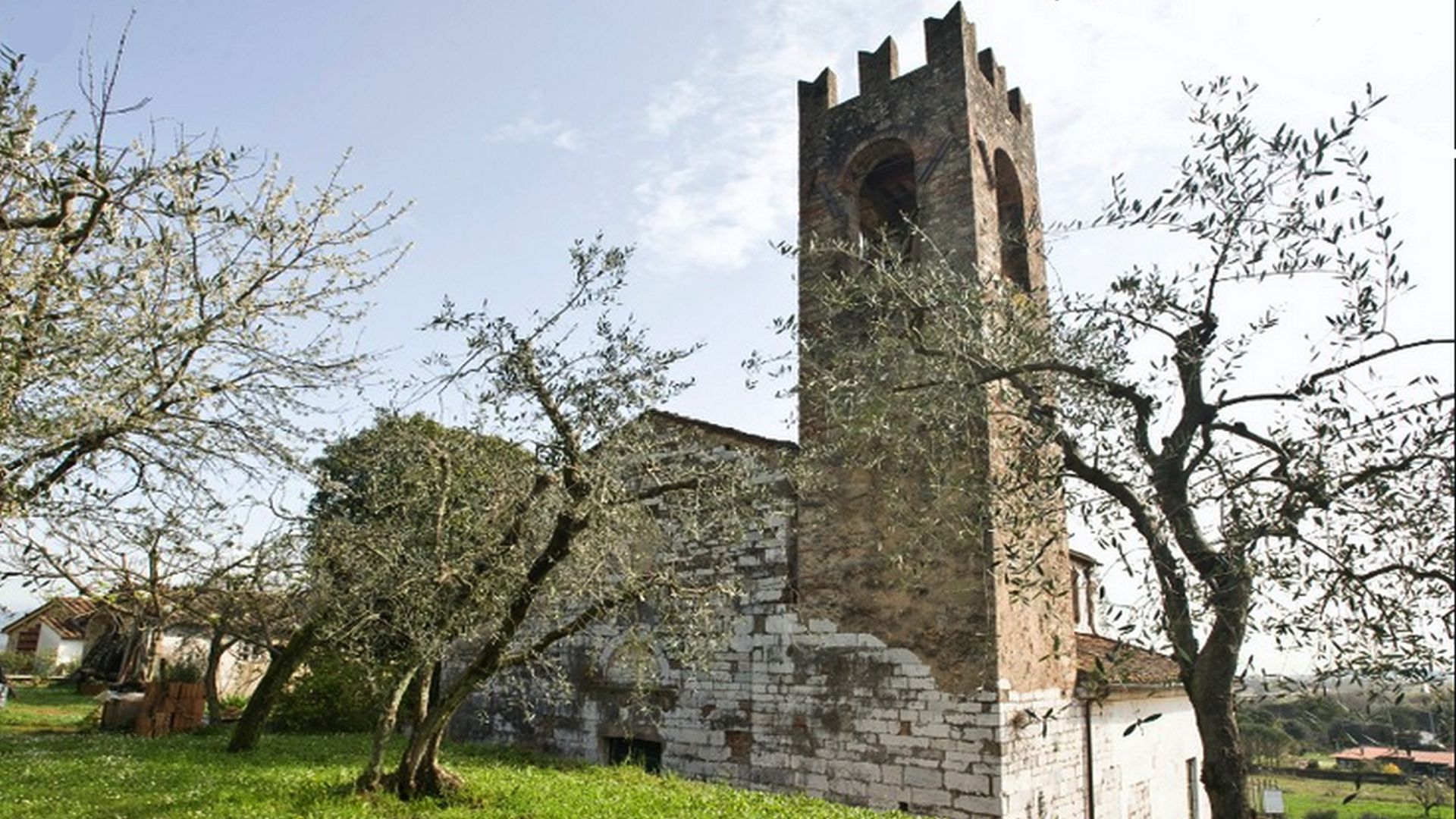 The last village, before facing "the mountain" is Santa Maria del Giudice, divided by the new road to Pisa, is located at the foot of Mount Pisano.

On the left side of the road, clearly visible even from a distance, is the old parish church of Santa Maria del Giudice from the 12th century, dedicated to San Giovanni Evangelista. Elegant and harmonious, with Pisan Romanesque accents and a two-tone decoration, it represents a small treasure of the village.

From here a path crosses the luxuriant and cool holm and holly oak forest reaching the convent of San Pantaleone, a Benedictine hermitage dating back to 1044.

In 1233 the building became a Cistercian monastery. Today it is abandoned but still full of charm and legends!
Mount Pisano used to welcome many of the hermit settlements in Tuscany so that it was identified with the Mons heremita appearing in a fresco of the monumental Cemetery of Pisa and in the church of San Agostino in San Gimignano. 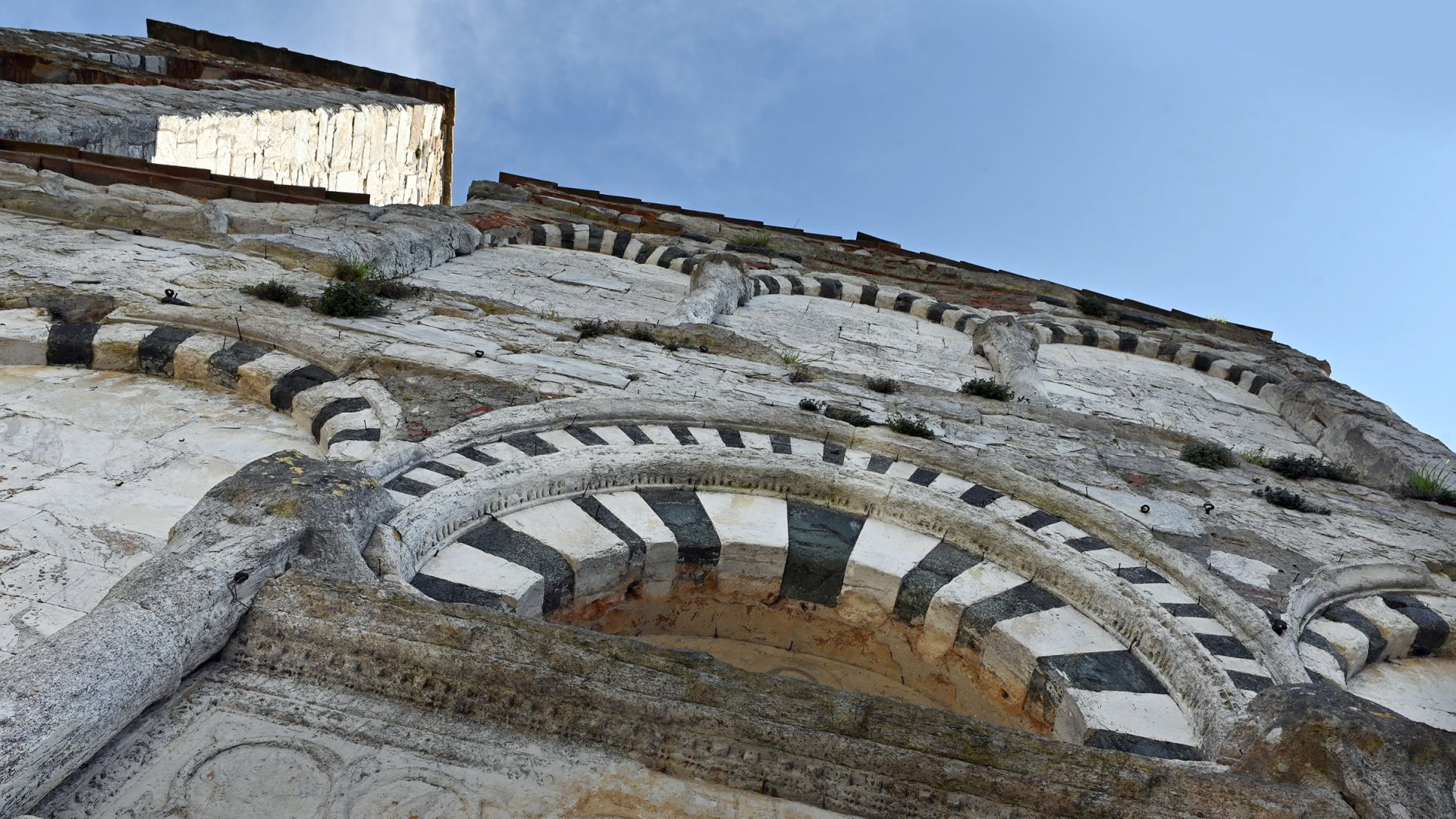 The new parish church, on the right side of the road, dates back to the end of the 12th century and is dedicated to the Assumption.

The white colour of the limestone from the local quarries is dominating the facade. The entire building is surrounded by an order of arches with long and narrow windows, repeated on the facade in several overlapping loggias, as a typical feature of the local Romanesque style of Lucca and Pisa. The octagonal bell tower is set directly on the apse of the church and based on an octagonal plan gradually getting more narrow upwards.

Looking up, you see the peaks of Mount Pisano which we can reached on a path (carriageway) that finally arrives at the Dante Pass.

"...He seemed to me a teacher and a master,
hunting the wolf and his puppies to the mountain
so that the Pisans couldn't see Lucca..."

This is what Dante wrote in Canto XXXIII of the Divine Comedy and thus reports the plaque under the bust of the Supreme Poet. The Dante pass corresponds precisely to the pass of the ancient road that connected Lucca to Pisa. 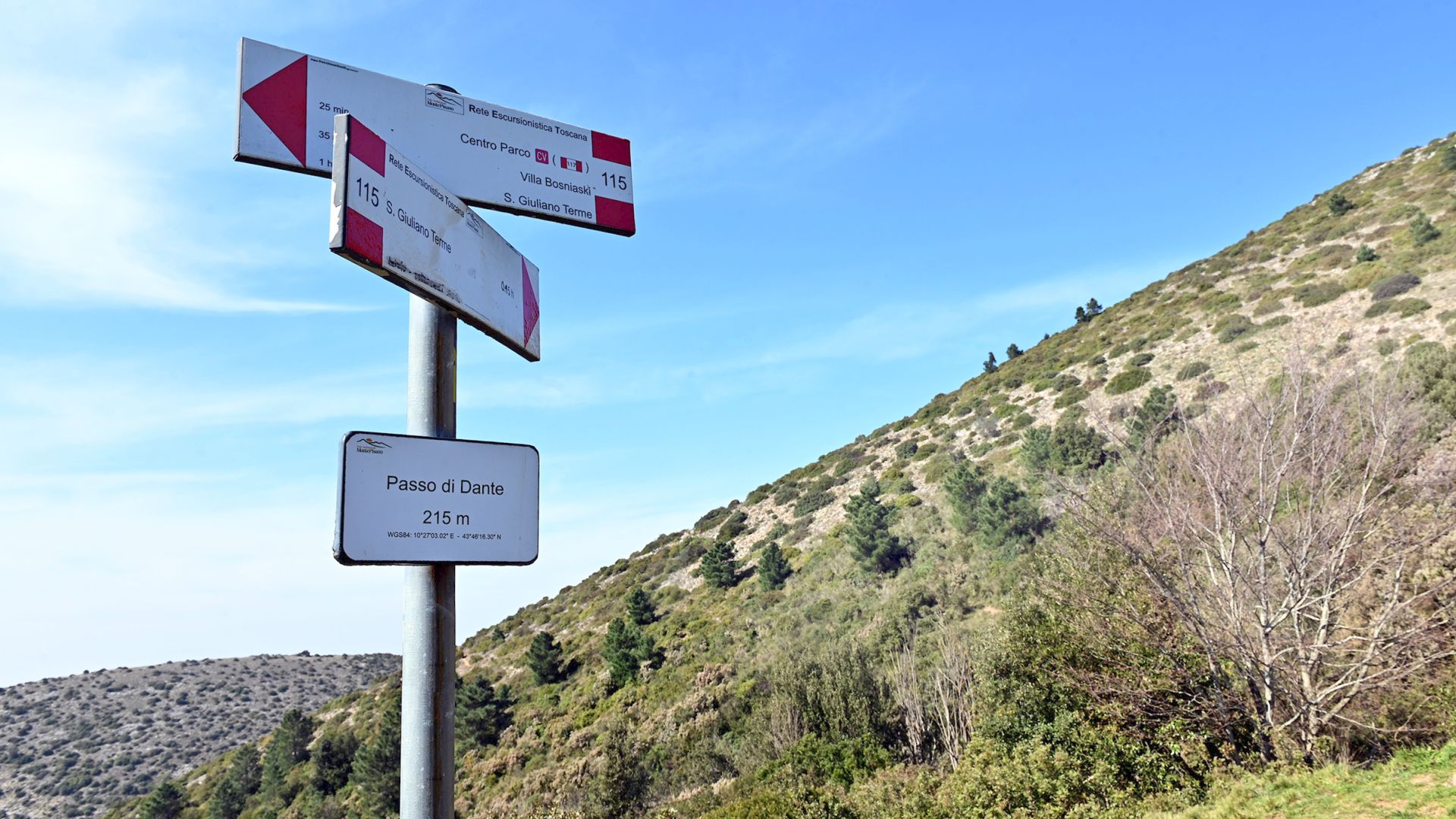 Coming from Lucca, a splendid view of the coast opens up and you can enjoy a small but interesting taste of possible easy trekking tours on Mount Pisano among myrtle, holm oaks and Mediterranean scrub.

and you reach the hermitage of the Spelonca built near a miraculous cave. The hermitage was founded in 1190 by Honestus and Dulci, hermit monks who lived poor, sometimes in contrast with the ecclesiastical institutions. They also dedicated themselves to the religious assistance of the population who lived in these places and who had difficulty in reaching the churches.
The building is a small church with a single room, built on a originally medieval building, further  renovated in the 19th century when the façade and the barrel vault were realised.

Not far from there interesting structures carved directly into the rock including a cistern with a quadrangular opening, built close to the cave, a staircase with holes for a gate and a circular tank surrounded by channels, pole holes and joints.
On both sides there are also visible base rooms which probably were used in the hermitage. 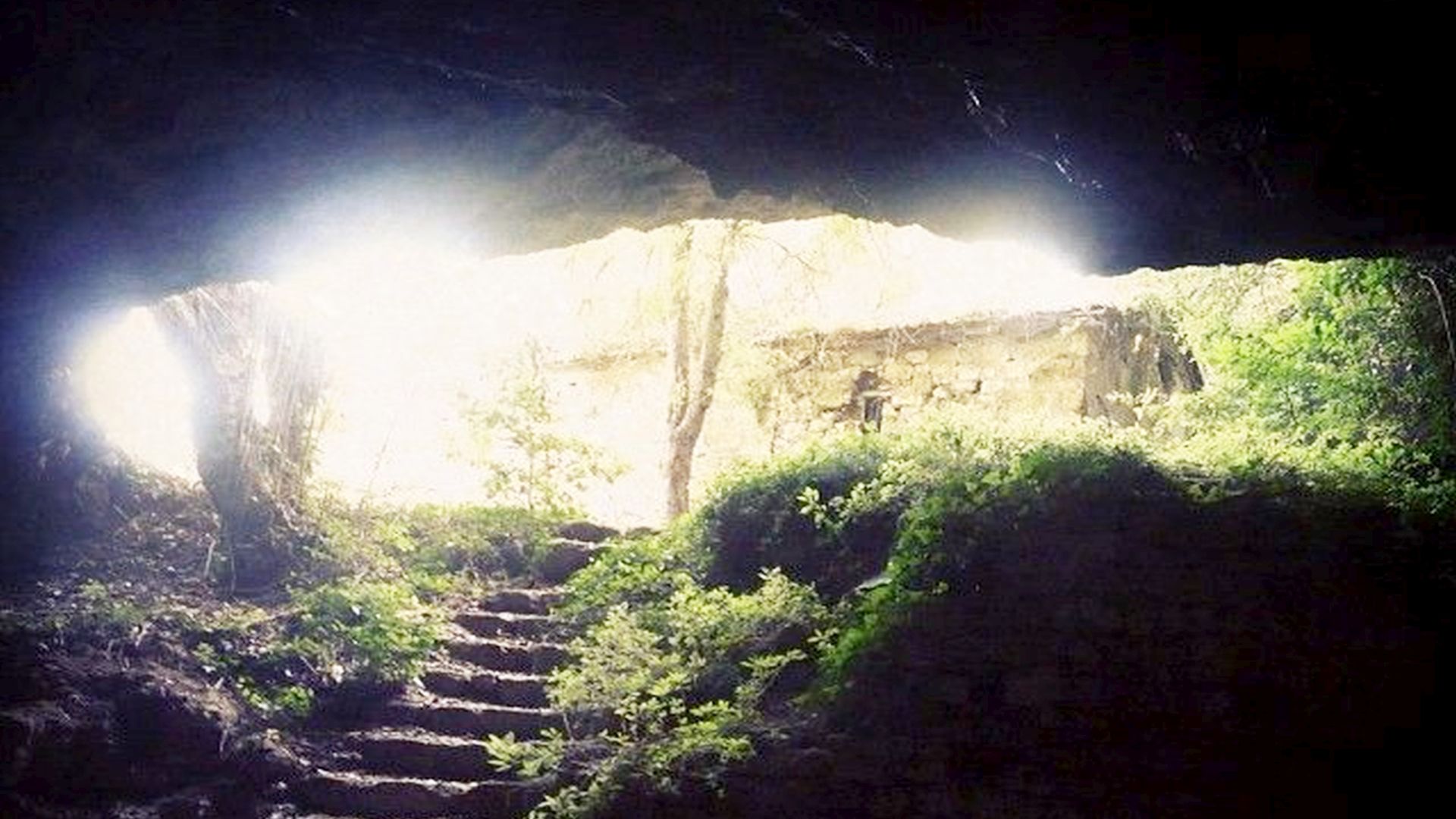 Its origin is lost in the mists of time. The black hermits who founded it around the year 1000 dedicated themselves to the religious assistance of the inhabitants of the area far from the cities. Near the chapel you can see a baptismal font carved in stone. As in many other caves of Mount Pisano, the water of the cave, drop by drop, has healing powers following the popular tradition.
The long-shaped stone next to the building shows the footprints of the Devil's horse in those silent places and the unsuccessful attempt to stray the holy hermit who lived there and who threw the devil instead on Mount Penna. From that time, it is said, Monte Penna became the arid summit as we know it and nothing grew there anymore.