A visit to Montecarlo in Autumn 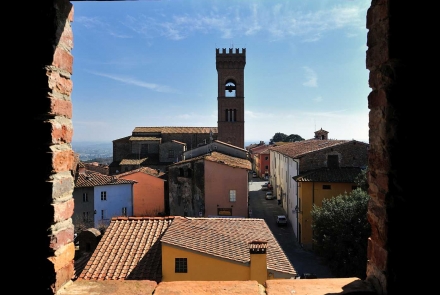 Montecarlo in autumn offers intense atmospheres and emotions: the fresh and regenerating air, the colourful landscape with shades of yellow, orange and red, the narrow alleys immersed in silence and calm.
Just put on a soft neck scarf and head off to discover the wonders of this small Tuscan village, awarded in 2021 with the Orange Flag by the Italian Touring Club.

At 162 m above sea level, on a hill overlooking the surrounding plain, between Piana di Lucca and Valdinievole.

A characteristic medieval village dominated by an imposing fortress whose oldest part dates back to the early fourteenth century.
The Collegiata church of Sant'Andrea, overlooks the main street, which still retains the facade and portal of the fourteenth-century building. Inside, enclosed in a seventeenth-century marble frame, there is a fresco of the fifteenth-century Florence art school depicting the Madonna del Soccorso in the act of protecting a child from the Devil ‘s claws.
A small door on a steep alley opens onto the small but welcoming theater of the Rassicurati, built in the early eighteenth century and still today a center of intense cultural and theatre activities. Two tombstones inside commemorate the passage of two illustrious characters from Lucca, the poet Giuseppe Ungaretti in the 1960s and, previously,  Maestro Giacomo Puccini.

Porta Fiorentina, Porta a Lucca (or Porticciola) and Porta Nuova (or Porta dell'Altopascio) remind us that we are in the heart of medieval and cautious Tuscany.
The best panorama? The one that can be admired from Porta a Lucca and Porta Nuova. Breathtaking views over the Plain of Lucca, the Valdinievole and the hills drawn by the orderly rows of vineyards, interspersed with woods.
Not far away, at the foot of the hill and on the road to Pescia, there is also an ancient church that is worth a stop along the journey. S. Piero in Campo dates back to the 12th century and is a pure example of a Romanesque church with three naves.

The gentle contrast between the hills, olive groves and vineyards invite visitors to a  make a stop for a tasting of typical local wine and food with its characteristic flavours of the autumn season.

Montecarlo is one of the oldest wine-growing areas in Tuscany where you can taste excellent white and red doc wines, known and appreciated all over the world.
Farms and agricultural estates welcome Italian and foreign visitors all year round. A relaxing walk among the vineyards, a guided tour of the cellars to discover the techniques and secrets of wine production and, finally, a well-deserved tasting with delicious snacks and seasoned with excellent extra virgin olive oil from the area.

You cannot visit Montecarlo without a stop for a pleasant surprise in shape of ... a majestic and magic tree, where history and popular imagination merge.

A "fairytale" route, to be done by car, by bicycle or on foot for the more athletic and trained ones, up to the monumental 600 year-old oak tree with an impressive size: more than fifteen meters high, a trunk of four meters in circumference and a crown of more than 40 meters in diameter. Long and twisted branches that offer with the "autumn change of clothes" a wonderful show of lights and colours. The leaves, falling to the ground, become a sumptuous carpet that covers the space around the trunk.

The writer Collodi recounts that Pinocchio was hanged here by the killers, but the witches also had their work cut out above the large crown of the tree. Dancing in the moonlight and magical rites on Sabbath nights, so that the tree, instead of developing in height,  assumed its characteristic "flattened" shape with some branches in a horizontal position. The souvenir photo with the Witches' Oak is a must!