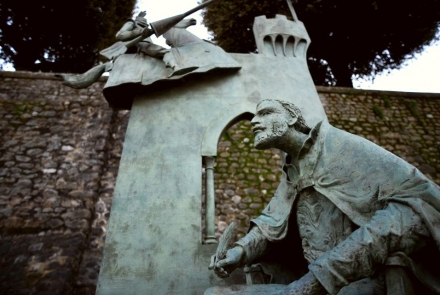 A longing for fantasy, thick, shadowy forests, lights creeping through the foliage, castles dominating the valley and from which one can enjoy spectacular views of the mountains, torch-lit squares that come alive with Renaissance dances, sword duels and soldiers in armour.

Fantasy in these parts arrived with Ludovico Ariosto, governor of the Este Garfagnana. Take a day to follow the poet in the Garfagnana lands, a few kilometres from Lucca.
A chance to get to know a very singular valley with fascinating and varied landscapes, enclosed between two mountain ranges from different geological eras, crossed by a river that, not to put too fine a point on it, has two sources, one on the Apuan Alps, one on the Apennines. From a castle to a fortress, one travels between the fantastic panoramas of the beech and chestnut woods, the soft, green pastures of the Apennines and the rugged, white crests of the Apuan Alps.

Castelnuovo is a small village on the hill at the confluence of the Turrite and the Serchio, enclosed between the medieval fortifications built by Castruccio Castracani in 1248 and the Renaissance fortress of the Este family. The historic centre is a collection of mediaeval houses and Renaissance palaces with a stately appearance, with loggias and diamond-shaped doorways, as is the custom in Ferrara, overlooked by 'il Duomo', the church of San Pietro, so called because of its elegant design of Florentine inspiration. Not far from here, leaving the gate of the mediaeval walls, you can cross Castruccio's bridge over the Serchio river.

In 1522 Ludovico Ariosto arrived in Castelnuovo from the Radici pass. He was the new Este Commissioner of the province of Garfagnana. It took up residence in the Rocca, which was renovated for the occasion, part fortress and part lordly palace, and took its name. From the outside, it has a mighty appearance with towers and turrets clad with rounded river stones to give a noble, yet not too severe, effect. The entrance is surmounted by a stone tympanum with a coat of arms and the entrance courtyard has a well and an elegant staircase. In the interior distribution, although adapted to the current uses of municipal offices, it maintains intact the room that was once Ariosto's office, the prison rooms and the assembly hall.

Throughout the year, terrefuriose.it is the programme of events that will animate Castelnuovo di Garfagnana, on the occasion of the 500th anniversary of the arrival of Ludovico Ariosto, who served as Estense Commissioner in Garfagnana from February 1522 to June 1525. Many cultural initiatives centred on the figure of the illustrious governor and more generally on the historical period, lasting four centuries, in which Castelnuovo di Garfagnana was part of the Estense Duchy.

For two days in May, we go back in time to the time of Lodovico Ariosto.
Knights, musicians, dancers, sword duels in the streets of the centre, and then meetings with fantasy authors and artists, role-playing, card and board games, shows and concerts, while minstrels sing the exploits of Orlando's knights.

The fortress of Montalfonso stands on a hill already fortified in antiquity to the west of Castelnuovo. In 1561, taking advantage of a visit by Alfonso II, the Astrologio, a complicated astral chart, a kind of augural horoscope, was compiled and renovation work began. The fortress can be reached from Castelnuovo in a few minutes by following a winding road through woods and vineyards. The 1150-metre-high Mura, after having housed Alfonso d'Este's mounted garrisons, a farm, and prisons in the second half of the 19th century, now houses the offices of the Apuan Park and numerous events in the summer season, and offers splendid views over the roofs of Castelnuovo and the Panie group of the Apuan Alps.

Ludovico Ariosto, during his stay in Garfagnana, repeatedly had to deal with the local brigands, who, while opposing the Governor, always paid the Poet the utmost respect.

"Il Moro" is the protagonist of the stories of Sillico, the village perched on the Apennine spurs that overlook the Pieve plain, with beautiful stately palaces with portals and well-designed stone windows, and steep paved streets that form concentric rings around the hill, small squares, the remains of a medieval tower with a quadrangular plan, and all around dense chestnut woods.

An ideal observatory over the entire valley, in a strategic position and in direct visual relation with the fortified village of Castiglione di Garfagnana and the Fortress of Mont'Alfonso in Castelnuovo Garfagnana, which can be observed from the churchyard of the Church of San Lorenzo.

In August, the village is a portal to the times of the Duke. The two main entrances to the village are closed by mighty gates for the Renaissance Festival with figures, tastings and games, dedicated to the Sillico bandits, led by the famous 'Moro', a character also mentioned in Ludovico Ariosto's letters to the Duke of Este, who also inspired a network of paths and easy loop walks that start from the village.

In July 1524, Ludovico Ariosto visited the Verrucole fortress, which he had found to be 'furnished only with all the inconveniences'. It consisted of two fortresses on a 'wrinkle' that had belonged to the Gherardinghi Lombard lords of the valley. The fortress was only reinforced at the end of the 15th century with the construction of the wall that surrounded them both and is, after recent restoration, one of the most fascinating in the valley. From a distance, it captures the eye for its beauty and the natural environment that surrounds it; from the two towers that look towards the Apennines and the Apuane Alps, the gaze can sweep over the entire valley.

If you are in the mood for time travel, you can visit the Archeopark and relive the times when the fortification was an active defence guarding the valley. On 10 and 15 August, two special events enliven the fortification with torchlight processions and stories around the fire, games and entertainment for all ages.

To complete the 'Ariostoesque' tour of the strongholds, one can take the winding roads to Trassilico and Cascio. The journey is worthwhile, if only for the spectacular views. The castle atop the hill of Trassilico is well restored and has an incomparable view of the Apuan Alps and Mount Forato.

From Cascio the view stretches over the entire valley and the peaceful loops of the Serchio, and in October the air is filled with the fragrant scent of crisciolette, 'historic' local street food made of corn and wheat wafers stuffed with cheese or bacon, very tasty.

The itinerary is very enjoyable in all seasons. In the intense colours of summer, in the flaming colours of autumn, in the whiteness of winter and in the colourful freshness of spring.