Versilia, Upper Versilia, historic Versilia and the Versilia coast represent many aspects of a single, but rich and varied territory with multiform landscapes and welcoming atmospheres.

Versilia is the name of the river that, descending from the Apuan Alps, crossing the hills and flowing finally into the sea, gave name to the entire area.

Just a few kilometers from the historic center of Lucca, the Versilia coast is an inviting place that offers evocative landscapes with wide and soft dunes, sharp mountain profiles, delicate colors of olive groves and the famous white marble in the Apuan Alps that bear witness of local history and culture, like the long beaches and trendy clubs, which has been a source of inspiration for many artists and one of the most popular holiday destinations. 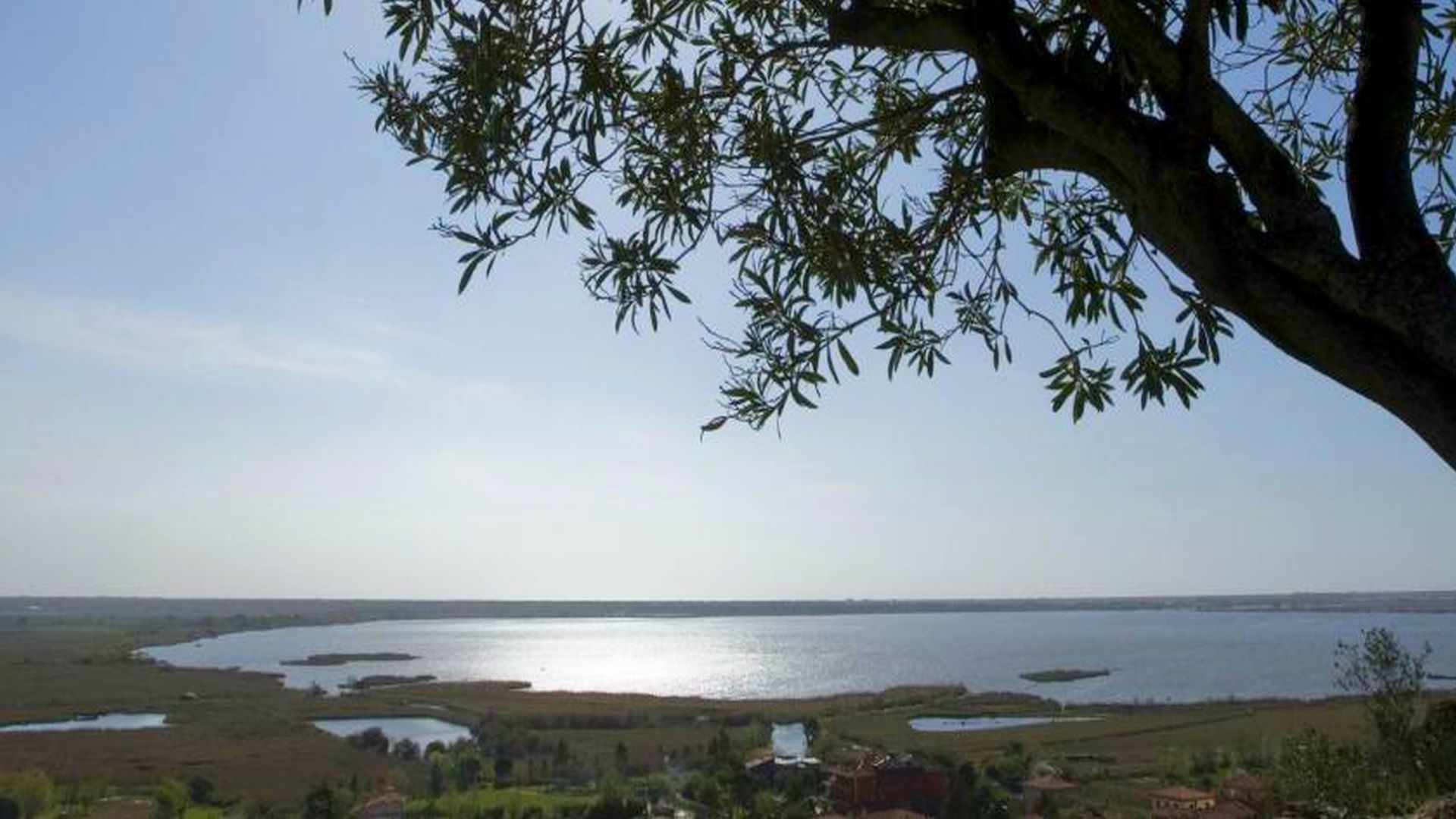 Upper Versilia, mountains with a view on the sea

The marble route descends from the Apuan Alps to the coast, in a natural and civilized landscape through the mountains to the sea, passing from historical to contemporary Versilia, from raw material to works of art, from the marvelous natural architecture of Mount Procinto and the natural arch of Mount Forato to the deep channels of Mount Corchia's karstic caves and underground rivers, to the slopes caused by marble transportation, arriving finally to the refined atmosphere of sculpture workshops and art galleries of Pietrasanta.

Before the nineteenth-century land reclamation of the coastal marshland was definitively finished, Versilia had the features of the Apuan Alps, the hills and valleys of the Serra and Vezza rivers, the historic villages of Stazzema with the ancient white parish church built on the edge of a ravine, and those of the mountain pastures of Pruno, Volegno and Cardoso.

Seravezza is located at the foot of the mountains between two rivers, and hosted in the past Michelangelo Buonarroti, sent by the Medici to choose some precious marble. The rosette of the small chapel of Azzano is a tribute to the Cervaiole quarries, which offered refined marble types: white, arabesque and breccia.
Pietrasanta hosted also other artists coming from Florence who created a refined local art. There are still many sculpture workshops and galleries today and many artists choose Pietrasanta as their hometown. The works of Cascella, Botero, Miozzo, Mitoraj, Marinky, Messina, Finotti, Folon are exposed in squares, cloisters, railway stations, churches, alleys, making Pietrasanta an open-air museum of contemporary art. Artists and artisans working marble and bronze are appreciated at the same time, and in their workshops it is possible to order commission works for public and private spaces all over the world.
Last but not least, Forte dei Marmi is a name related to marble as well, since it was the place where the heavy cargo was shipped to International destinations, but is today one of the most famous holiday destinations in Italy. 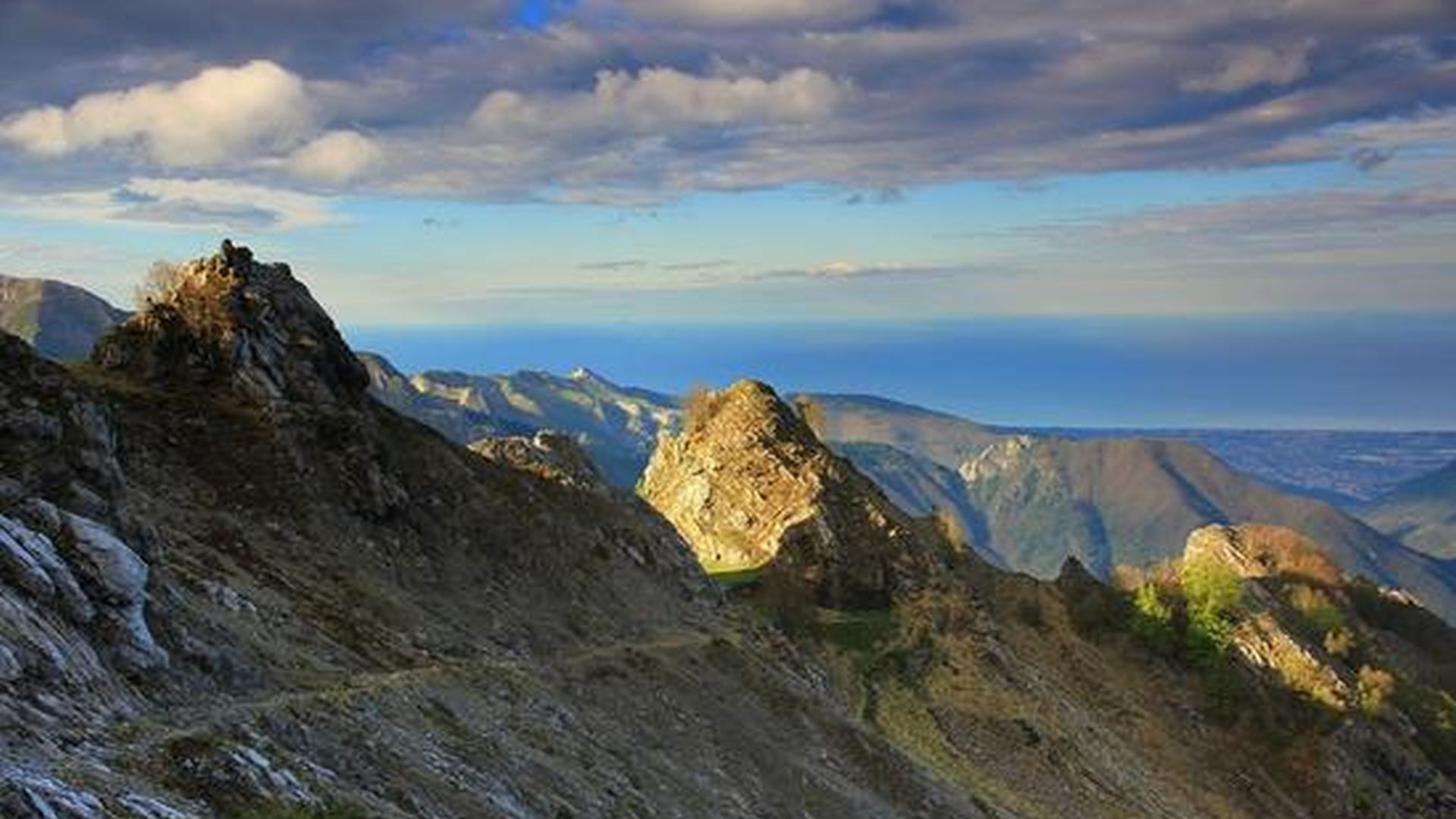 Protected by the Apuan Alps and overlooking the Mediterranean sea, the hills of Versilia are a collection of fascinating landscapes of all times.

In recent times struck hard by history, this land is appeased by its memory, contemplated in silence or with the music every summer International artists play on the organ in the small church of Sant'Anna di Stazzema inside the National park of Peace, with a wonderful panorama opening up to the coast.

The Roman villa of Venulei dates back to more ancient times and was built on a hill close to the shore of lake Massaciuccoli.

Time has passed and many stories have been lived before the 19th century Bourbon villa in Capezzano Pianore was realized, hidden by a dense vegetation with all kinds of plants and a collection of palm trees donated by Carlo Ludovico to his wife Maria Teresa from Austria. And then there is Pietrasanta: a town full of life with contemporary art in the galleries and cafés, in the streets and on the squares, many works of art; splendid marbles in Renaissance style decorate the interior parts of the churches and the Saint Martin's cathedral, a building that could easily be placed also in some Italian capital. There is also an medieval fortress, an important Pilgrimage route, the Via Francigena, crossing the town to arrive after the strongholds of Vallecchia and Corvaia at the lake of Porta Beltrame and further to proceed towards Rome; in the year 990 bishop Sigerico and the pilgrims used this route, still full of castles, villages, churches, cloisters and abbeys, perfect for a rest and well connected with a network of trails.

Between the olive groves of Valdicastello, the San Giovanni e Felicita parish church stands out with its elegant proportions and bas relief decorations. In the village of Camaiore the main church Collegiata dell'Assunta, presenting a clean shape combined with colourful marble decorations typical of many churches in Versilia, is located inside the old center, while the imposing abbey Badia di San Pietro with its balanced and harmonious architecture is located outside the center, not far from the parish church of Pieve a Elici. Also there it is possible to admire the beautiful panorama all over the Versilia coast. Inside the church full of history, the 18th century pipe organ is played in summer in occasion of a classic festival. The pine forest, the dunes and the sea. Versilia presents a unique and precious natural environment.

Coastal marshland and woods, dunes, the results of reclamation in the swamp area, the lake and pine forests, the open sea ... a natural environment, accessible and welcoming with a varied landscape, that offers different scents and colors in every season, for those who travel on foot or by bike along the cycle paths; on board of the Krill research catamaran, you can get in touch with the dolphins and whales of the "Sanctuary of the Cetaceans".
Along the entire coast, where the original dunes and the vegetation have been conserved, ponds for numerous species of waterfowl arriving in all seasons are accessible.
A big variety of plants like junipers, pine shrubs, helichrysum, Bermuda grass, and occasionally some centaurea and golden rod  from which a particular honey with the aromatic scent of the beach is collected.

The Versiliana park is the last remnant of the plantain wood, an intact corner and a refuge of numerous species of all kinds, plants, mammals, fish, birds and amphibians. On the Massaciuccoli lake there is the Lipu WWF Bird protection station.
The central pine forest of Viareggio called "di Ponente" is a  domestic park with a holm oaks, pines and broadleaves equipped with kiosks, restaurants, dog areas, bicycle rentals and rides for children, while the other pine forest in the Southern area of the town called "di Levante" reaches Torre del Lago Puccini from the Darsena port area, once the archduke property for which Maria Luisa di Borbone wanted to realize great gardens typical of a palace, which was not completed. 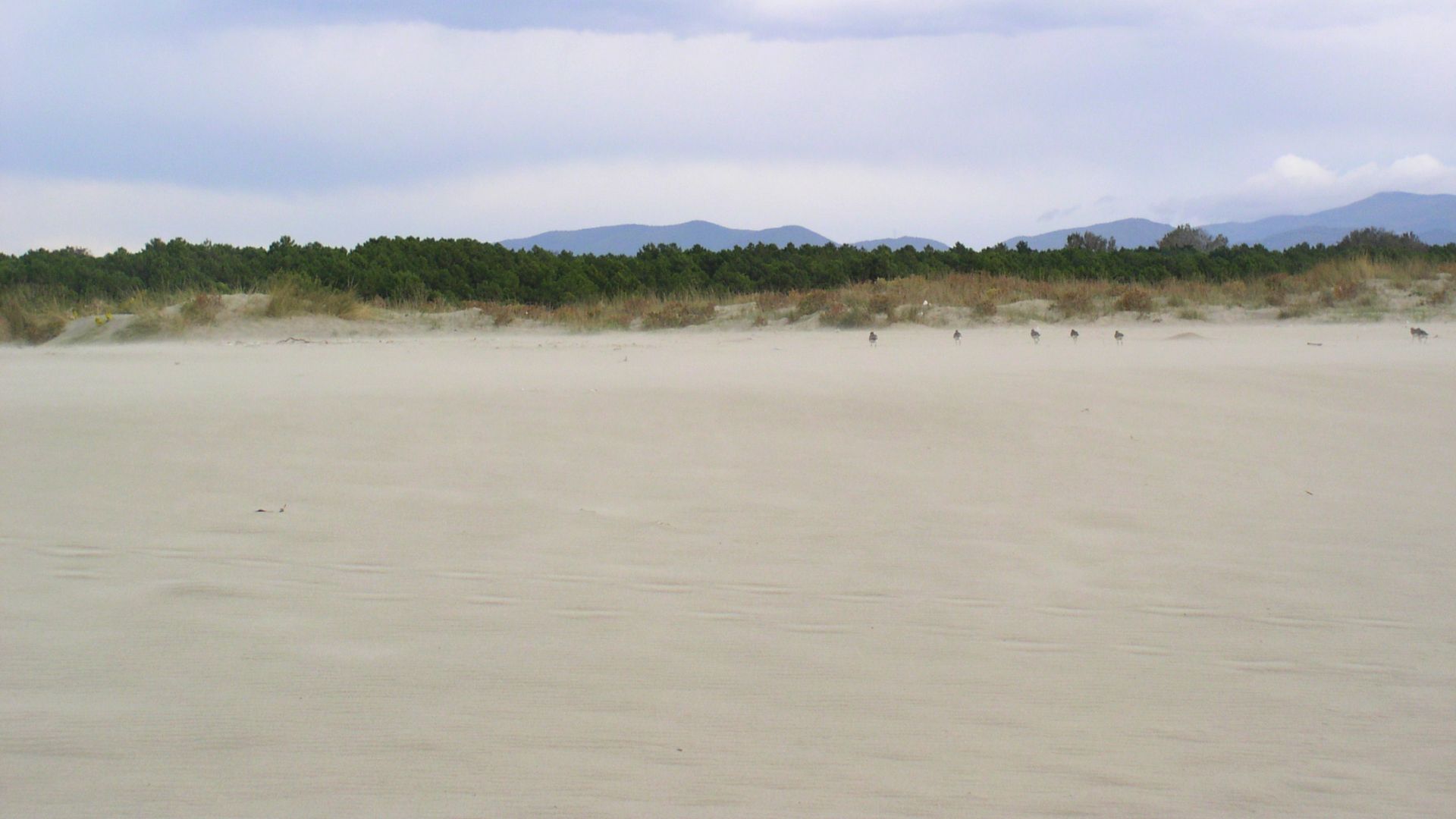 In 1822 Paolina Bonaparte Borghese built a villa on the coast, launching the fashion of the sea baths, and opened to the aristocracy attracted by the new holiday destination and its wild romantic spaces.

The dukes of Bourbon started with the reclamation works of the marshland on the coast and the duchess Maria Luisa even built a large palace on the estate near the lake, with a tree-lined avenue and a network of small access roads to farms and estates.

At that time the Versilia coast came to life as a tourist attraction, being much appreciated by artists and intellectuals that were fascinated by the luminous atmospheres of Lake Massaciuccoli.
Giacomo Puccini called it "Il caro bozzo" (my dear puddle) and he loved its delicate atmosphere and colors, but also the variety of game. He was looking for "a quiet village, luxurious and extraordinary sunsets" where to buy his new home and find inspiration. The interiors of the villa on the lake with a garden, are the result of collaboration with some of his friends, the artists Chini, De Servi, Nomellini, and represent the memories of his life: the hunting memorabilia and the triumphs on the stage, eclectic and fashinable furnishings.
After the Maestro's wish, on the shore of lake Massaciuccoli, a great theater close to the water that hosts his operas in summer, was built.

Many other artists followed him. D'Annunzio writes about romantic pinewoods, scented forests with salty air that are still preserved in the park of villa "la Versiliana" in Marina di Pietrasanta, in the district of Roma Imperiale in Forte dei Marmi the villas of painters, writers, musicians, actors and intellectuals are located one next to the other, in Viareggio, along Avenue Margherita the Art Nouveau style buildings : bathing establishments, residences, theaters, cafés, a particularly fascinating promenade in winter, when this architecture reveals the scenery of one of the most famous beaches in Italy; at the GAMC art gallery about 3000 works realized by these great painters, sculptors, graphic designers who illustrated Versilia and European twentieth century art, are exposed. 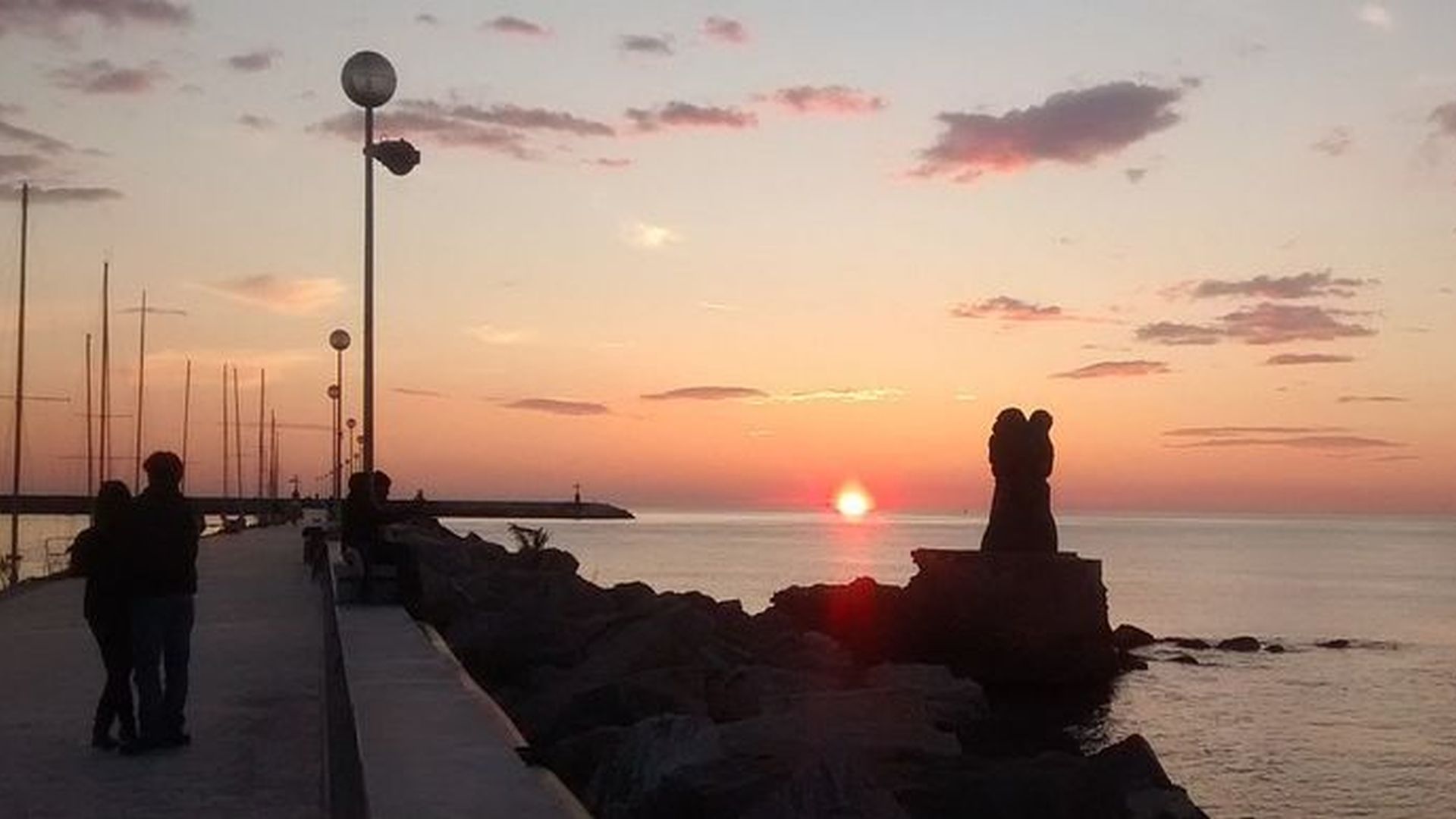 The coast, in short, has a recent history, but very successful! Wide sandy beaches, fragrant dunes, shady pine forests, a small dock for romantic sailing and luxury boats and a promenade of shops and trendy clubs for more than a century.
For the shopping break between sea and culture, in Versilia there are many markets that occupy the avenues and squares on alternate days. Some famous and ... precious, others smaller, but always intriguing.
The seafront reaching from Viareggio to Forte dei Marmi is a natural shopping center. After a day on the beach, you can taste appetizing dishes in excellent restaurants and go for shopping in elegant shops with great labels open in summer until late night, or enjoy entertainment in many clubs along the coast, in the Versiliana open-air theater, at the grand open air theater on lake Massaciuccoli or in the Carnival arena.

In the port area of Darsena in Viareggio once little traditional boats like "navicelli" "trabaccoli", "brigantini goletta" and "barcobestia" were built. The Maritime Museum hosts a collection of memories also about the craftsmanship of the carpenters and caulkers, and about the experience of the mythical Artiglio deep-sea divers which recovered sunken treasures in the oceans around the world at the beginning of the last century.
In the new Darsena dock area, in recent years, instead of fishing boats, yachts and cruisers are built.
Traditional procedures were updated with the use of new materials, lighter and stronger, and new construction techniques have been applied, also by the artists of the most famous carnival in Italy, the Carnival of Viareggio that came to life in 1873, to realize the huge allegorical floats.
The first float builders used their experience from the docks as carpenters and the techniques and construction methods to make solid structures with gaudy carnival colors.
In the Carnival Citadel the Burlamacco statue welcomes visitors with a big smile inviting them to plunge into history and the techniques of the papier-mâché constructions representing contemporary themes in an ironic way: politicians, intellectuals, soubrettes and imaginary characters have no way out!

> A TRIP ON THE LAKE > LIBERTY VERSILIA