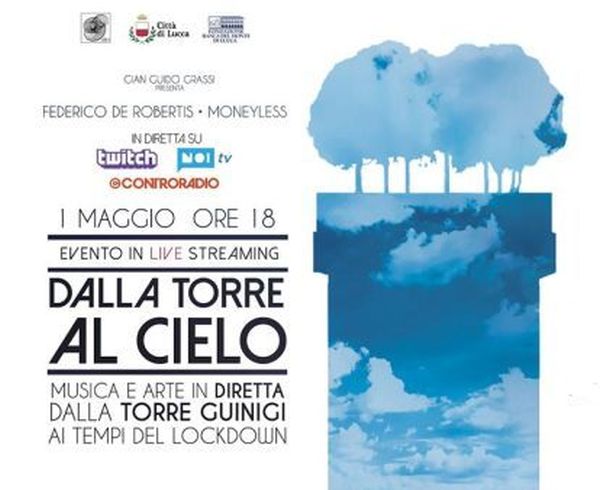 From the Tower to the sky

Using #dallatorrealcielo anyone can participate in the concert by posting, before the event, a nice and funny image of daily life of how you passed the quarantine period.

In Lucca, in times of lockdown the concert on May 1 is held on the Guinigi Tower.

Music and art of hope: live on NoiTv and on the social networks of Start- Open you eyes, organized with the Municipality of Lucca and the Banca del Monte di Lucca Foundation, the music selection of Federico De Robertis in a live broadcast and an artistic installation by Moneyless.

On May 1 from 6:00 pm a special concert  "Dalla Torre al cielo" (From the Tower to the sky) music and art live from the Guinigi tower. To follow a live broadcast on the link https://bit.ly/dalla_torre_al_cielo.  Federico De Robertis will perform a music selection from the roof garden of Torre Guinigi that will span 300 years of history and five continents, ranging from Beethoven to John Coltrane's Jazz and Underworld electronics, from Central American salsa to Giacomo Puccini to conclude with Jesus Christ Superstar by Andrew Lloyd Webber. Pieces belonging to different music worlds united by universal beauty helping us to find a sense of community, a journey through space and time that the composer from Lucca dedicates to the city to transmit a spirit of beauty and collaboration in the perspective of a new future.
Moneyless will create a temporary installation, a suspended platonic solid formed by its characteristic threads tied to the branches of trees, and a banner of over 100 square meters with traditional circles to outline a big heart with the colors of the city. The event is curated and will be presented by Gian Guido Grassi, who will read some passages. Directed by Simone Rabassini and Paolo Marchetti, you can see the installation, performances and panoramic images of the city live thanks to the help of a drone.

Federico De Robertis, a musician and composer born in Lucca in 1962, he graduated in Piano in 1988 at the P. Mascagni Conservatory school of Livorno. Since 1991 he has collaborated with the film director Gabriele Salvatores, also winning some prizes. In 1994 he began working as a soundtrack composer for various films and jingles for commercials and soundtracks for Muse. His latest work is the soundtrack of Mysteria, independent US film with Martin Landau and Billy Zane, and he also acts as a Disk Selecter. In October 2011 he founded a new band called Fede & gli Infedeli.

Moneyless (Teo Pirisi), born in Milan in 1980 he grew up in Lucca, is considered one of the important international urban artists with works made in galleries, museum spaces and public contexts in all continents; he exhibited in Spoleto, Noto, Caserta, Los Angeles, Buenos Aires, Berlin, San Francisco and was the protagonist, in 2019 of the retrospective exhibition "Moneyless, The geometric alchemist of urban art", at the Palazzo delle Esposizioni in Lucca.

Gian Guido Maria Grassi, artistic curator in 2017 he founded stART, creating important institutional exhibitions, including La Rondine / Prologo and those dedicated to Ozmo and Moneyless, urban and landscape regeneration projects through art (Welcome to Pisa, Street art in quarry and Start Festival -Lucca) and is the author of writings on urban art and artists.

Together with the amphitheater, it is one of the symbolic architectures of the city. 44.25 meters high, the unmistakable skyline of the tree-lined top has made it famous in the world and one of the most photographed subjects of Lucca's monuments. The tower is part of an imposing building commissioned by the Guinigi family, rich and powerful merchants of the fourteenth century, and is now the the last testimony of many towers that enriched the city in medieval times. The top, a hanging garden with century-old holm oaks can only be reached by climbing the 230 steps of the staircase to enjoy the splendid panorama over the roofs of the city, the hills, the Apennine mountains and the Apuan Alps.