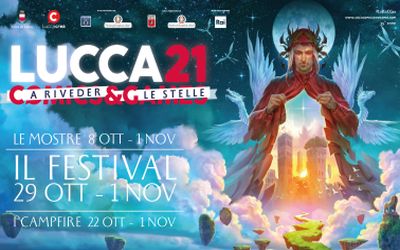 This is the claim and the guideline of the 55th edition of Lucca Comics & Games, in attendance again after the 2020 experience of Lucca ChanGes.

The North Star that will guide the Festival, from Friday 29 October to Monday 1 November, will be in fact the return to a direct  relationship with the public, a community making the event unique representing the most important exhibition dedicated to comics, games, storytelling and contemporary mythologies, with stands of the creative industries that represent it.

A community event producing not only culture, but a place where different kinds of conscience meet, share and self-educate by using a unique and monumental space, getting inspired by the most loved stories, by the intuitions of their authors and by modifying their own surrounding environment. The English word Light is therefore the perfect synthesis of this new vision: Lucca Comics & Games wants to be part of the passage from a dark moment to light, a road towards the new normal which also includes a more agile set up of the event.

In the year of the Dante celebrations, the focus of this Lucca Comics & Games edition is the poetic image of Dante's journey with Virgil through the darkness of Hell.

In Paolo Barbieri ‘s poster, the author of the previous representation of Dante's Inferno designed a grassy road, suspended in the midst of flying rocks in the sky, leading towards the wonder of the Dante's myth, when opening his red robe, a fantastic vision of Lucca  with the places of the Festival is revealed. Lucca is the door of Imagination that introduces us to this world of fantasy.

Let’s start with the masterful panel dedicated to the precious Treccani volume La Commedia nello specchio delle immagini, arriving at different pop interpretations: from the famous Inferno di Topolino by Guido Martina, to the image research by Gabriele Dell'Otto accompanied by Franco Nembrini and Alessandro D'Avenia, Dante's Guide to Hell, Dante's setting for the 5th edition of D&D, and Ora dei Dannati by Luca Tarenzi, the second chapter of the fantasy trilogy set in the realms of the Divine Comedy.

is a new format combining music with comics. Famous artists will talk about themes triggered by images from the world of comics and illustration linked to their personal history. A dialogic journey accompanied by the mixture of artistic genres, such as background music and a live comic performance.

The invited guests range from Pau (Paolo Bruni), frontman of the band Negrita, to Caparezza, an artist with a strong identity and character, who defines himself as a "failed cartoonist" and a great connoisseur of comics and popular culture; with his tour Museica he has experimented between melodies and works of art, but also the band Lacuna Coil, the most famous Italian gothic band known for Batman World. And finally Shade: voice actor, freestyle champion and one of the most popular Italian rappers.

The ninth art and games on display

The 2021 edition will also mark the return of great exhibitions that offer the best of comics creativity and its related communication types, but also stimulate a reflection on important contemporary themes, at Palazzo Della Provincia (inauguration 8 October) and at Palazzo delle Esposizioni of the Banca Del Monte di Lucca Foundation (inauguration 22 October).

Will Eisner, il gigante, one of the greatest comic book authors of all time and father of the modern graphic novel.

Giacomo Bevilacqua, who became popular on the internet with the poetic comic strip A Panda piace.

Walter Leoni, an author born and professionally grown on the pages of social networks.

CMON offers a guided tour through the games and miniatures created so far, enhancing the artistic side of board games. All stages are on display: from the artwork to the painted piece.

The centenary of the unknown soldier

The anniversary is celebrated through a contemporary language renewing a powerful and still current message: the value of life, memory, sacrifice and homeland.

The historic train from 29 October to 2 November will stop in various railway stations throughout Italy, recalling the journey that a century ago brought the body of the Unknown Soldier from Aquileia to the Altare della Patria. Inside, a carriage where the auditory and visual sensations are evoked thanks to GiPi's Unastoria images and some repertory material that will take you back in time, into memory.

During the days of the Lucca Comics & Games festival the immersive experience of the train will be revived and expanded thanks to the augmented reality contributions of 20 artists. It will be the occasion to inspire encounters based on the five values ​​of the event in Lucca (Community, Inclusion, Discovery, Respect, Gratitude).

The return of the graphic novel theatre

After Hugo Pratt on the occasion of the 50th anniversary of the Ballata Del Mare Salato, Zerocalcare will present together with Kobane Calling, Leo Ortolani and Cinzia, Lucrezia by Silvia Ziche, two portraits:

Corpicino a teatro - Black pages for black chronicles - The mature and merciless opera by the brilliant Tuono Pettinato, directed by Francesca Caprioli and curated by Cristina Poccardi.

l'Oreste, quando i morti uccidono i vivi - A reflection on abandonment and denied love. A play by Francesco Niccolini, produced by Accademia Perduta Romagna Theaters and Societies for Actors.

In 2022, the 500th anniversary of the arrival of Ludovico Ariosto in Garfagnana will occur.

For the kick off,  a team of contemporary storytellers, coming from the world of fiction, comics and the web, will create an interactive literature experience, where the role-playing game will be the engine of a collective and shared narrative, capable of inspiring and producing new narratives - of cross-media spin-offs like - Ludovico Ariosto's The Frenzy of Orlando - Orlando furioso.

The renewal of partnerships

The Main Media Partnership with Rai television (Rai 4, Rai 5, Rai Cultura, Rai Ragazzi, Rai Yoyo, Rai Radio 2) is also confirmed in 2021, as one of the most appreciated live spots of the festival. Insights, documentaries, debates and many other proposals so as not to miss even one of the scheduled events comfortably seated on your sofa and on demand through the exclusive section reserved for Lucca Comics & Games on RaiPlay.

The festival recaptures the city

Lucca Comics & Games is back ready for emotions in the heart of the city, offering visitors the opportunity to find the most popular publishers and exhibitors in historical areas and in places to (re) discover: the central pivot of the comics are the stands in piazza Napoleone, Palazzo Ducale and the spaces of the Palazzetto dello Sport, seat of the activities of collecting and original drawings. The games are at the Real Collegio and in the Cavallerizza area while the world of Japan is located in the wide spaces of the Polo Fiere in Lucca; the Music & Cosplay area is located in the San Francesco complex.

The book expo is back with stands full of previews and exclusive products accompanied by the expected live events organized in collaboration with the comic book publishers: a rich program that will grow week after week and an expanded exhibition area to give even more space to the passion for the Ninth Art, ensuring maximum safety.

When games come to town ...

The most important publishers on the national and international scene will be present at the Festival, with many news and exhibitors of gadgets and related products. The organized play activities, the playroom, the demo area and the meetings and historical events of the cultural program of the Games Area and all the traditional festival activities will take place in dedicated rooms of the Cavallerizza area and on the first floor of the Real Collegio.

A new area is dedicated to fiction, fantasy and illustrations for children that will be hosted in Piazza San Martino.

In this area, TIWI and Sky Arte will be present for the first time, presenting the new publications inspired by the original productions broadcast in autumn on Sky Arte. A collection of unpublished volumes including graphic novels, illustrated books and sketchbooks edited by TIWI and available in preview for the visitors of Lucca Comics & Games 2021. Special guest Carlo Lucarelli will present the register of illustrated short stories "In compagnia del lupo ".

Somewhere between a theater performance and costume crafts, the cosplay world finds its home inside the beautiful Villa Bottini.

The frescoed rooms and the garden will host some of the most interesting national communities, including Assassin's Creed Cosplay in Terre di Mezzo Cosplayer, Ghostbuster Italia, Avengers / X-Men and 501 Italica / Rebel Legend and Empisa, medieval fantasy, with steampunk suggestions , the post apocalyptic world of The Walking Dead, the Harry Potter universe and the magic of Disney. At the San Francesco auditorium the Cosplay Competition will be held on Saturday 30 October.

A piece of Japan in Lucca

The Japan area conquers the largest commercial space of the Festival at the Polo Fiere with over 5000 square meters, and one of the two largest car parks to access the event.

Inside the Expo area several sections will welcome visitors in complete safety to taste the experience of the Rising Sun and of course, also the food pleasures: a snack area with truck food outside the Polo fiere and a typical Japanese food space in the inside.

In the San Romano Auditorium, a medieval church transformed into the Esports Cathedral for the occasion, the Italian Esports Open is back, the very center of the program with 4 days full of events including tournaments, showmatches, influencers and panels with special guests .

All comic fans will have the possibility to experience a widespread dimension of the Festival, directly from their homes, with online events, meetings linked to media partners and activities promoted in the approximately 120 Campfires, which will be officially active from 22 October. The basic values ​​of the Festival guide this 2021 edition which, despite being in this particular historical moment, focuses on the future and the perspective of what the Campfires will be, placing the Community at its center, that is the extraordinary world made up of enthusiasts, shops, publishers and operators that meet every year at Lucca Comics & Games.

Level up experience, much more than just a ticket

In its fourth anniversary the Lucca Comics & Games premium ticket becomes a real experience. Only 100 lucky Level UP fans will be able to enjoy the usual distinctive ticket services (relax and refreshment areas, skip the line, welcome bag, exclusive badge, etc.). This year they will also be able to experience another absolutely unique opportunity by being guided on an all-round tour over the four days of the event, exploring all single locations, experiencing a series of scheduled events from breakfast to after dinner and also taking advantage of a dedicated shuttle to make the most of every moment of the Festival!