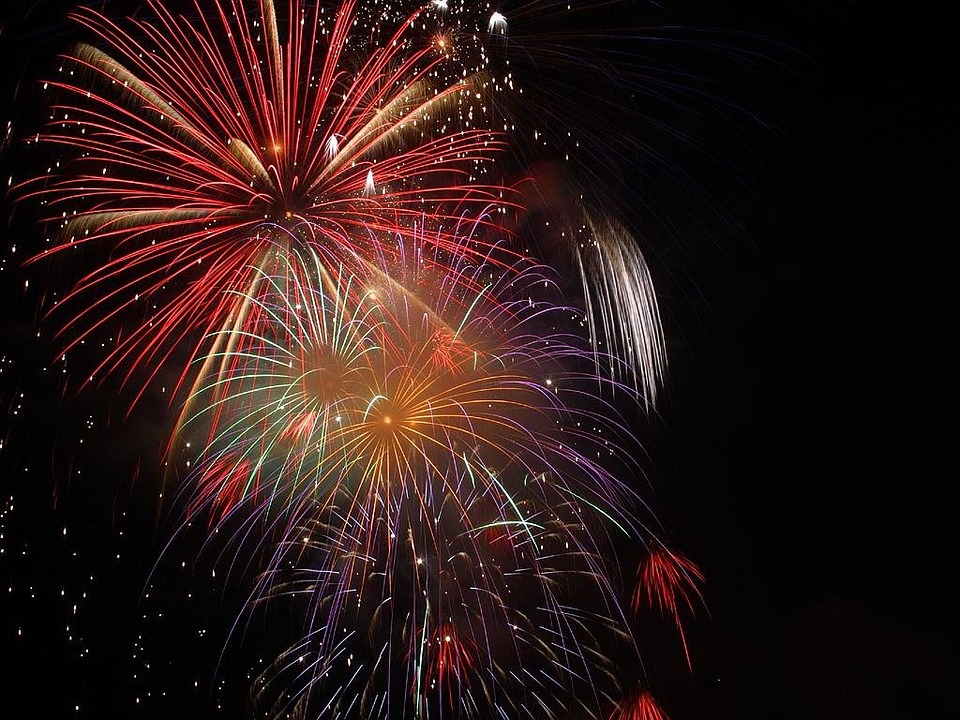 In 742, he arrived in Lucca, on a cart drawn by indomitable oxen and after crossing the Mediterranean Sea on an unmanned boat, a mysterious dark-skinned crucifix.

It is the Holy Face, and it is precisely to remember this "miraculous journey", that every year on September 13th in Lucca there is the "Luminara", a procession that winds through the streets of the city, illuminated by thousands of candles hanging from the windows. The next day is a festival, in the streets of the city and especially in the district of Borgo Giannotti, on the north side, is held the first of three traditional markets, which close with the Fair of San Michele, a traditional fair in which from the countryside and mountains came supplies for the winter in a symbolic beginning of autumn.

These September fairs have been joined over the years by other events and initiatives that make the whole month of September, in the warm lights of the city and the colours that announce autumn in the countryside, a month of celebration.

Here is a taste of the programme of the celebrations of the feast of the Holy Cross, the market initiatives with the fairs, the historical re-enactments set up by local companies of crossbowmen, musicians, flag wavers and a selection of the events of September in Lucca.

on September 13th at 19:00 from the church of San Frediano starts the procession for the Luminara di Santa Croce, but do not miss in the afternoon hours the show of the preparation of the route and the lighting of candles. The procession ends in the Cathedral where the traditional "Mottettone" is performed from the Cappella Musicale Santa Cecilia. At 23:30 the evening closes with the fireworks display along the river that can be observed in the company of all the people of Lucca, from the walk of the city walls.
on September 14th at 10.30 am in the Cathedral of San Martino, Solemn Pontifical in celebration of the day of the Exaltation of the Holy Cross. Throughout the day the chapel of the Holy Face will be open for those who want to pay homage.
on September 28th at 17:30 in the church of San Michele in Foro will be held the Concert for St. Michele Associazione Polifonica Lucchese.
on September 29th at 6:00 p.m. the solemn celebration that closes the festivities of September.

Traditional appointments of the festivities in September are the markets and the amusement park.

From August 24th to September 29th comes the Luna Park at the amusement park in Via delle Tagliate. From 3.00 p.m. to midnight the traditional "carousels" of September with free tickets on September 24 for disabled children and on September 25, 26, for all children.
From 1st to 30th September, the loggia of Palazzo Pretorio hosts, from 9.00 a.m. to 7.00 p.m., the Exhibition of Agriculture and Territory, an exhibition of typical local products, a real taste trail among DOC wines, IGT, DOP and IGP oils, beans, ancient grains, honey and spelt from Garfagnana, chestnut flour and other products from the mountains and hills.
From the 13th inauguration 29th September, from 10.00 / 20.00 in Piazza Napoleone is open the traditional bric a brac market in September, with charity fishing by the Italian Red Cross.
And then, according to tradition, the fairs of Borgo Giannotti, heirs of the end of summer markets that were held in this area of access to the city for those coming from the mountains and the sea. It begins on September 14th with the fair of Santa Croce preceded, in the early morning, by the bird fair at the Foro Boario, then continues on September 21st with the fair of San Matteo and ends on September 29th with the fair of San Michele.

A leap in time with the re-enactments of city life in the Middle Ages accompany the religious holidays.

From 31 August to 1 September through the streets and courts of Nozzano, the castle relives in a medieval re-enactment in the ancient fortified village.
On 13, 14, 15 September, on the occasion of the feast of Santa Croce, the associations of Lucca organize the eye of Lucca and the gazar of the artillery of Santa Croce the historical re-enactment of the communication system of the Republic of Lucca with evening fires and gunfire.
On September 22nd in Piazza San Martino at 3:30 p.m. the Palio di Santa Croce is played, a crossbow shooting competition between shooters of the Terzieri citizens.

The events of September in Lucca are many and varied. There are markets and craft markets and many initiatives of music, culture, sport and solidarity.

two important themed market exhibitions for a shopping proposal of quality and tradition.

On the first weekend of September, from the 6th to the 8th Murabilia Mura in fiore, the quality gardening exhibition market, is back. The spaces of the city walls will host from 10:00 to 19:00 a hundred exhibitors, craftsmen, nurserymen, architects of the floral sector.
From 27 to 29 September, from 10.00 to 20.00, at the Real Collegio di Lucca, the fourth edition of Lucca Artigiana, Exhibition-Market of the excellence of craftsmanship in the Province of Lucca.

from 20 September to 6 October XXV Luccautori Literary Festival in the elegant rooms of Palazzo Ducale, Villa Bottini and Centro Cuturale Agorà.
September 22 for the Festival Economia e spiritualità, meetings with economists, artists, journalists, environmentalists, university and religious professors at the Auditorium San Romano.
on September 26th the Urban Walls will be the protagonists. At 3:00 pm at Villa Bottini, a conference on the historical fortifications in the territories of the twin cities of Lucca.

as in every occasion, in Lucca a lot of music is played, of many genres, in the elegant locations of the historical buildings of Lucca. Among the number of appointments of the month,

On 15 and 22 September at 21:00 continue the Sunday meetings with the great international organists at the organ of the Cathedral of Lucca with the review Cathedral Music - Music in the Cathedral
From 17th to 28th September at 9.00 p.m. at Palazzo Ducale, instead, you can change music! Lucca Jazz Donna is the Festival of female jazz music that every year offers lovers of this musical gnere, free concerts with great performers and musicians.
On 6, 14, 22, 27 September in the eighteenth-century garden of Palazzo Pfanner resonates chamber music of the XI season of Sounds of Lucca
From 24 to 26 September at 18.00 at Villa Bottini, Question of styles 2019 the IX edition of the review of genre and musical styles curated by musicologist Renzo Cresti.

the appointments for the die-hard sportsmen also on holiday

On September 6 at 5:30 a.m. At dawn I will win! the non-competitive race at dawn through the streets of the old town and on the cycle path of the stands around the Walls with final breakfast: cappuccino and croissants!
On September 7 from 6:00 pm to 10:00 pm starts from the Giardino degli Osservanti la Lucca di Notte, the very popular night march through the streets of the historic center, above and below the Walls,
On 22 September from 10:00 to 18:30 sports for everyone at Olympica, in the stands of the city walls.
On 29th September at 7.00 a.m. the Francigena Tuscany Marathon starts from Pietrasanta. 42 km from Pietrasanta to Lucca along the route of the Via Francigena