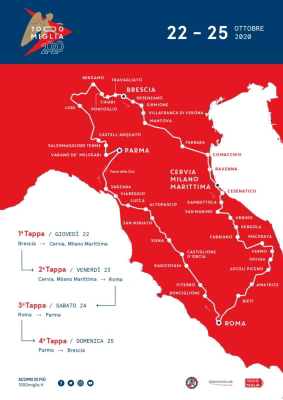 On Saturday 24 October, the 1000miglia passes through Lucca after stops in Ronciglione, Radicofani, Vitermo, Castiglione d’Orcia and Siena. It continues along the Cisa Pass up to Parma. On Sunday 25, the fourth and last day, after Salsomaggiore Terme, Castell’Arquato, Cernusco sul Naviglio and Bergamo, the cars will make their triumphal entry into Brescia, where it all began, 93 years ago.

The most beautiful car race in the world, the 1000miglia starts from Brescia on 22 October and crosses beautiful places like Lake Garda, Desenzano and Sirmione and will conclude the stage in Cervia-Milano Marittima. The following day is the turn of the Cesenatico - Urbino section, then Fabriano, Macerata, Fermo, Ascoli Piceno and Amatrice and will conclude the stage with the arrival in Rome, with return to Brescia on Sunday 25. At the starting line of the most important race in regularity in the world for historic cars this year there are 400 cars, preceded, as usual, by more than one hundred examples of modern cars.

Enzo Ferrari called the 1000 Miglia "A traveling museum unique in the world" and since 1927, the year of the first edition, the race has kept its innovative character. Not just a race but a mix of history, an outlook to the future and a journey through the amazing beauties of Italy.