The man of the soap bubbles 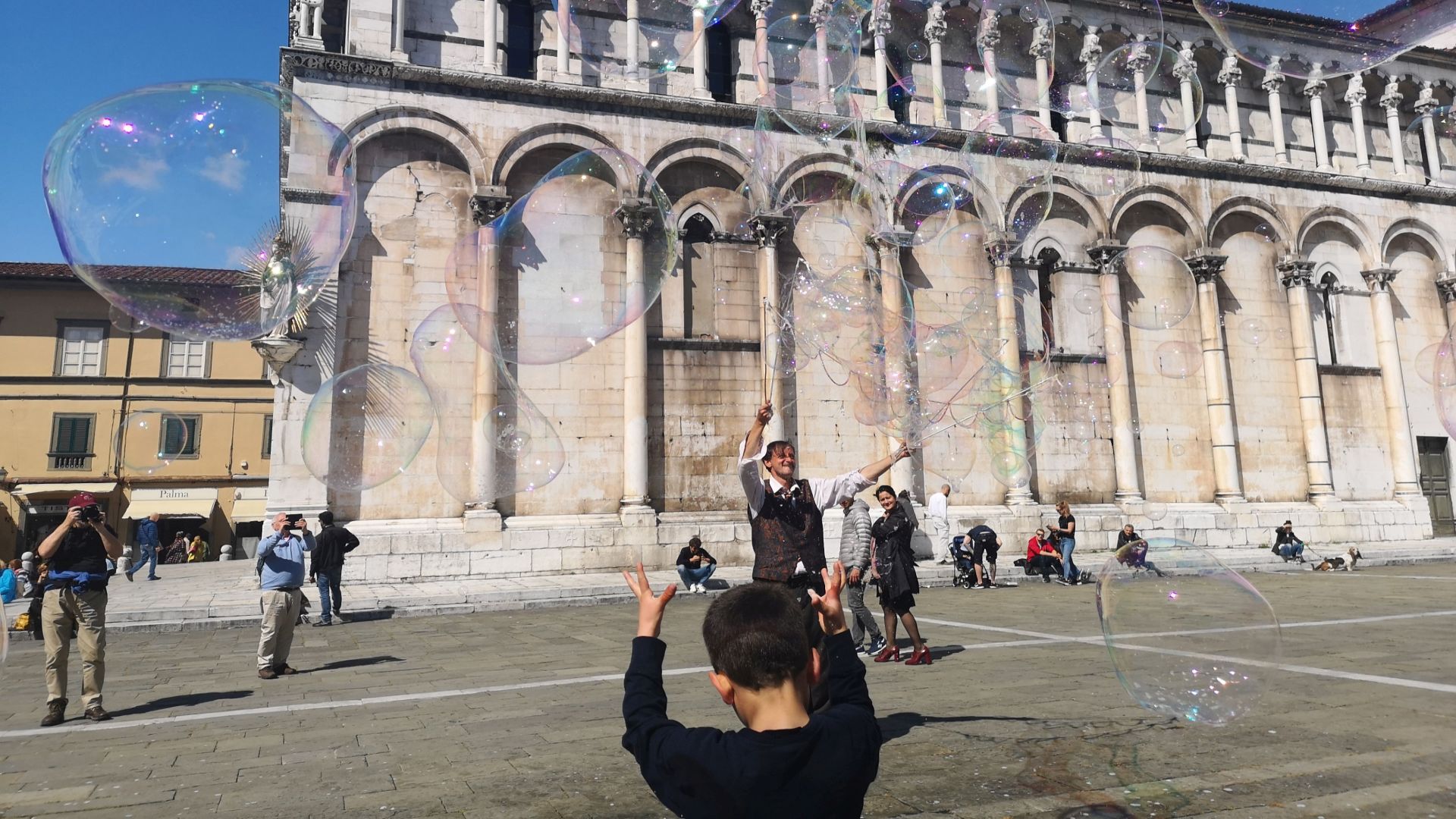 piazza san Michele after the rain
Monumnet to Francesco Burlamacchi 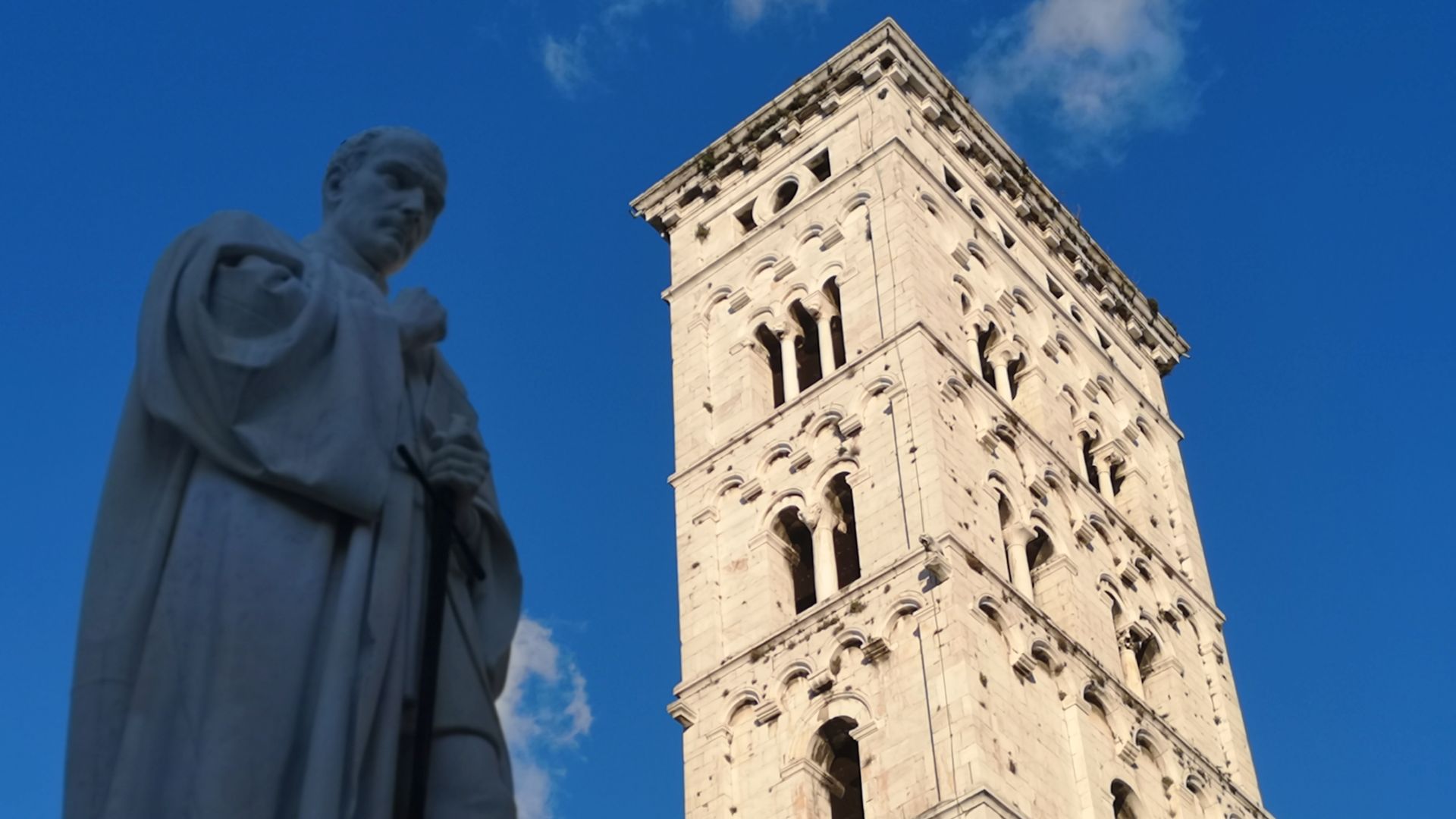 The "chains" of Piazza san Michele 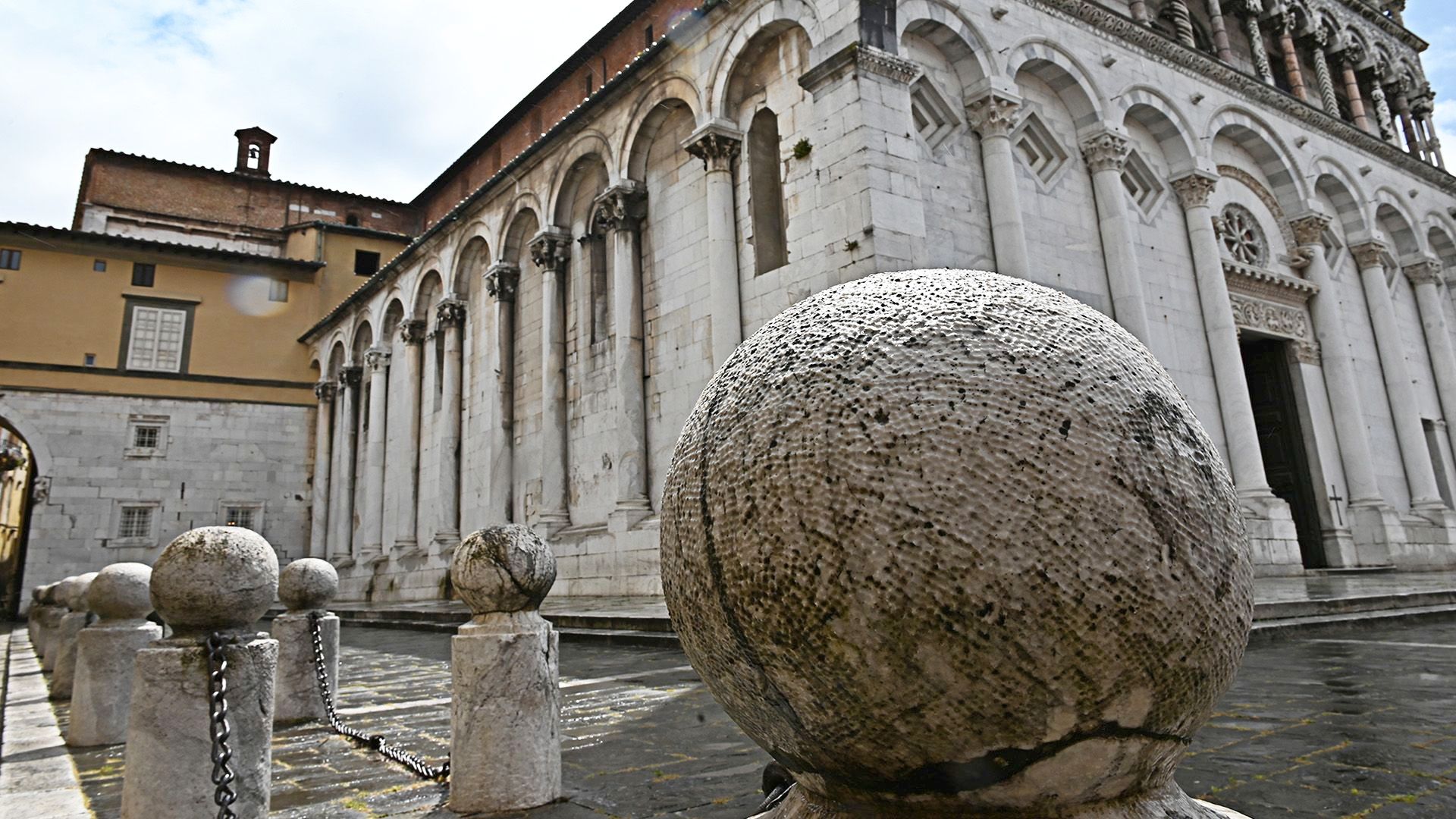 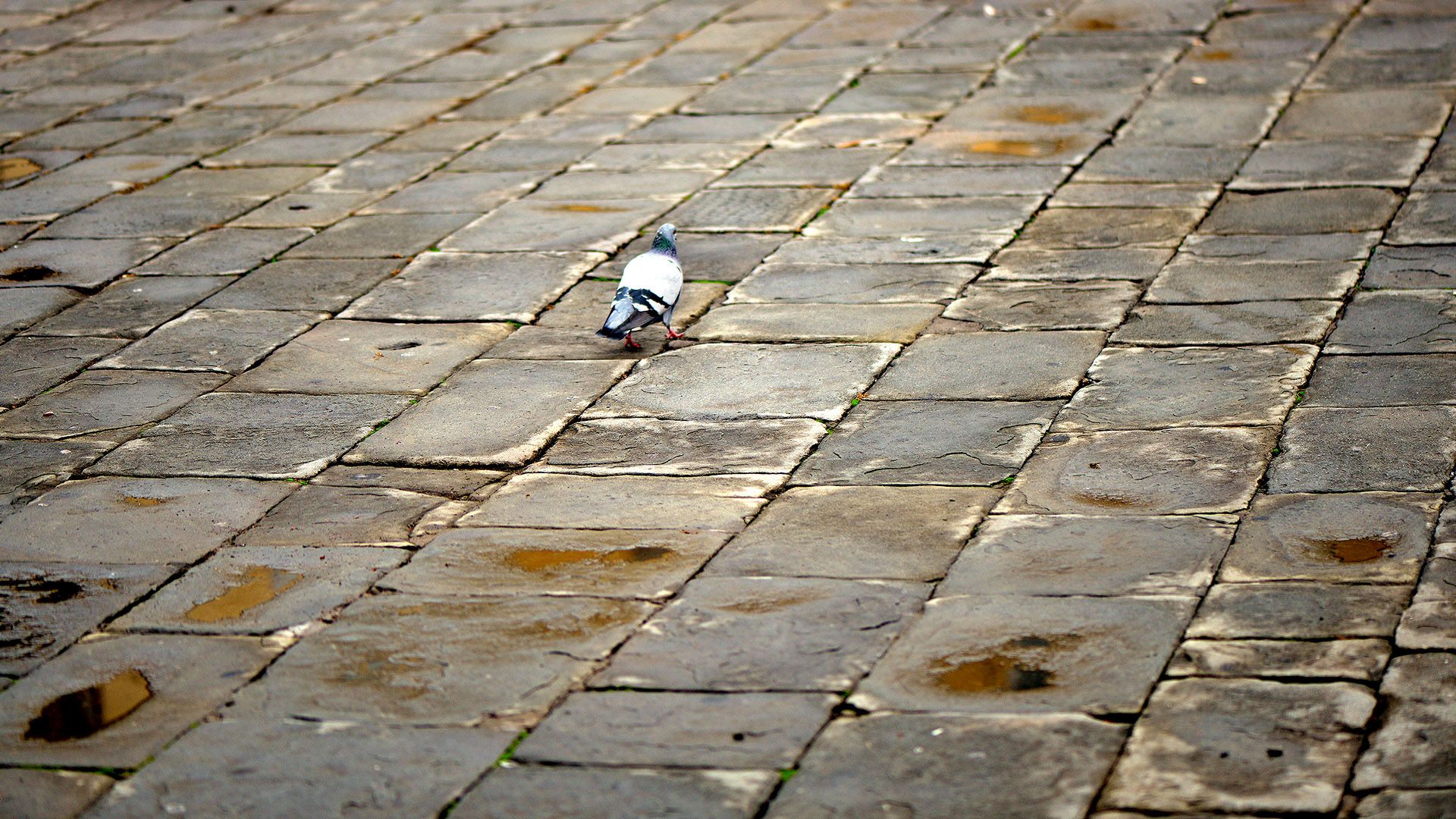 the sky over Piazza san Michele 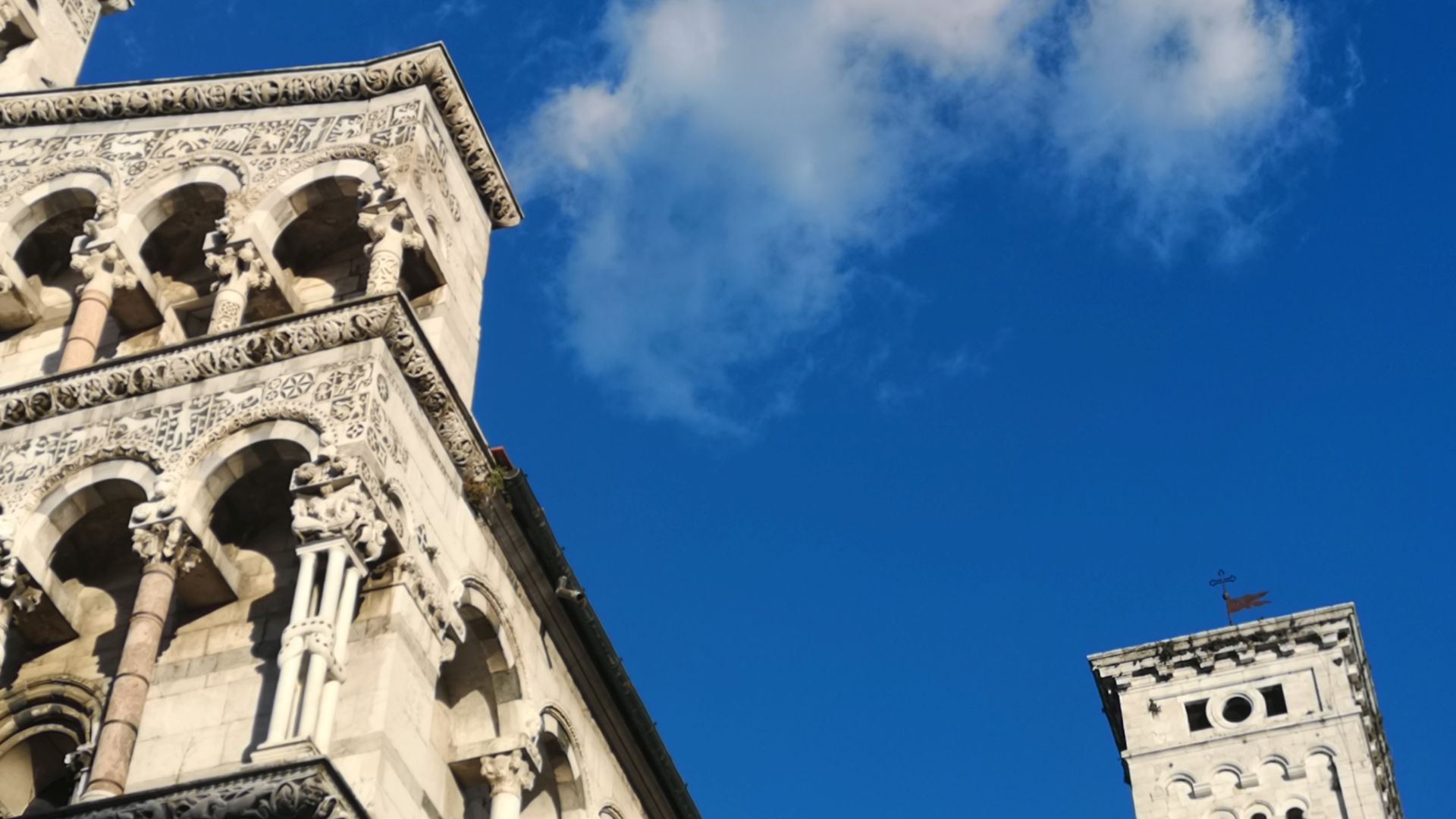 Piazza San Michele is the heart of the historic center of Lucca, the natural outlet of an intricate tangle of narrow streets and alleys coming from various corners of the city: many different perspectives depending on multiple entrances that lead to the square.

It is located on the site of the ancient Roman forum, right at the intersection of the two main roads: Cardo Maximus (from north to south, corresponding to the current Via Fillungo, Via Cenami and Via S. Giovanni) and Decumano Maximus (from west to east, today Via S. Paolino, Via Roma and Via S. Croce).
From its origins as the center of administrative, political and religious power of the Roman colony, it became the heart of the medieval city.
Lucca was the capital of silk in Europe in the Middle Ages and with the development of processing techniques and trade, the square became the place of transition for business and a meeting point. At the desks of the money changers and in the shops of silk fabric merchants, also foreigners were considered as an opportunity: people came to town to buy and sell, repair or commission works.

Unfortunately, just a few buildings of that time have survived, but they are easily recognizable by their architecture on the sides of the square, with round and pointed arches, brick facings and multi-light windows.
In the north-eastern part of the square, your attention is captured by the Church of San Michele in Foro, in Romanesque style with Gothic elements. The construction works, already documented in the eighth century, proceeded for a long time and during the centuries a complex contrast of different styles has been created.
Looking at the facade of the church, another detail can be immediately noticed: the majestic marble statue of Archangel Michael, defeating a dragon with his sword. According to legend, if you notice a strange sparkle, it comes from the diamond in the angel's ring. Over the centuries, someone swears to have seen it shine, in some precise secret point of the square, but the existence of this precious object has never been proven.

On the square there is also evidence of the Renaissance period, when the place continued to be the center of politics and business, and new impressive buildings were erected.
Palazzo Gigli, built in 1529 on a medieval foundation, is today the location of a bank branch, at the corner with Via Vittorio Veneto, Palazzo Pretorio, built in 1492, at the time the seat of jurisdiction. Under the large loggia there are some works of art related to famous charcters of Lucca, such as the bronze statue of the sculptor and architect Matteo Civitali and the bust of the explorer Carlo Piaggia. The loggia often hosts contemporary art exhibitions and food and wine events. A precious clock enriches the upper part of the facade.
In the 18th century the pavement of Piazza San Michele, originally made with fishbone bricks in the 15th century at the time of the construction of Palazzo Pretorio, was raised with large gray stone bricks and surrounded by marble columns joined by metal chains, as we still see it today.

In 1863 a statue in honor of Francesco Burlamacchi, an important local politician of the 16th century, created by the sculptor Ulisse Cambi, was placed in the center of the square.
The evidence of its long history is also visible in small apparently trivial details, such as the old signs of the pharmacies dating back to the early 1900s, or the Liberty style putti that are located above the shop windows on the west side of the square.

Today the square is still the heart of the city, a meeting and entertainment point for the inhabitants of Lucca and its visitors.
From the bar tables overlooking the square, the view is spectacular from every perspective.
In the historic pastry shop (since 1881) just behind the church tower, comfortably seated outside or in its characteristic interior with antique furniture, you can enjoy the view while sipping a cappuccino, a tea or a hot chocolate. Sweet lovers can also taste the typical local sweets, such as the delicious "Coi Becchi" cakes and the famous Buccellato, which has received many International awards, including the review of the New York Times gourmet and critic Mimi Sheraton, who included it in her book, "The 1000 Foods to Eat Before You Die".